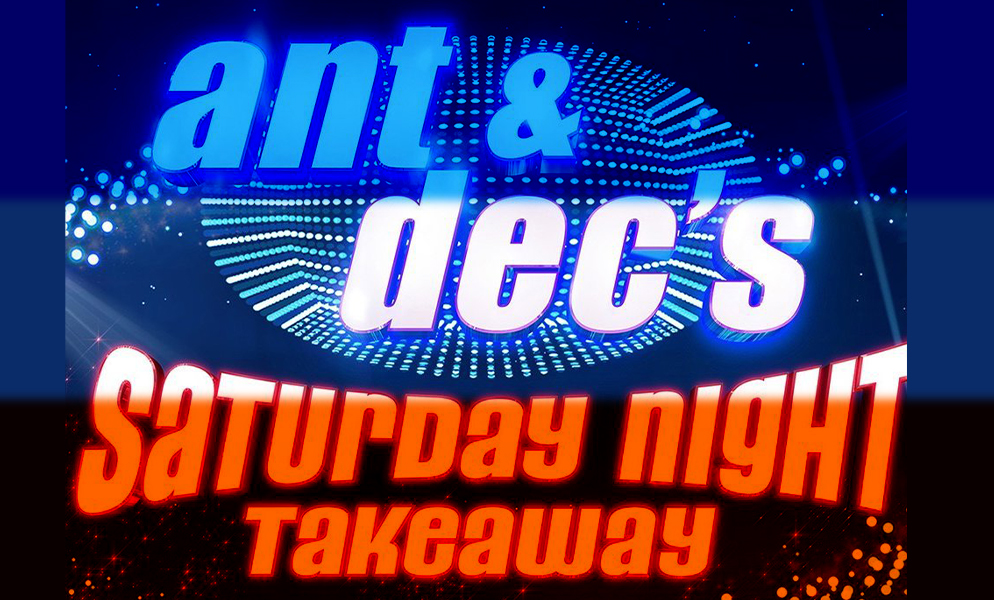 After the success of Pop Idol, Ant and Dec had turned around a career with ITV that had looked like it was hitting the skids. It was now time to try to make it work with a programme where they were the stars. In the year since Slap Bang, the duo had realised the flaws in the original concept – the most obvious being that there was no real hook or reason to stay tuned in.

For their new show, starting in June 2002, the pair were now working in tandem with Granada Television, a company more at home with Saturday night television. Some aspects of Slap Bang made a return, with the programme broadcast live in front of a giant studio audience, and the pair’s banter and affability still playing an important part in the mix. However the most obvious change was the concept that gave the programme its name. Ant and Dec’s Saturday Night Takeaway was the first fruit of a new scheme Granada had introduced whereby staff members were encouraged to come up with new ideas – very similar to David Young’s development unit at the BBC. Here, the main concept was a simple one – what if contestants could win everything that was advertised in the commercial breaks?

Rather obviously, this idea needed some development before it could reach the screens. The biggest hurdle to overcome was the regulations that demanded a separation between programmes and advertising, and the outlawing of product placement. ITV’s regional structure meant it also wasn’t possible to use Takeaway’s own ad breaks as they would differ around the country. What eventually showed up, then, was a game where the prizes were taken from a “randomly-selected” commercial break on ITV that week. In the end, a potentially revolutionary concept became a fairly standard format where the contestants were playing for a range of standard prizes, some good, some rubbish.

Still, at least it was a concept, and one that meant every episode of Takeaway would end with members of the public winning or losing huge prizes. The rest of the show included sketches and games, and with the “Win The Ads” concept running throughout the show, this was an approximation of the old Don’t Forget Your Toothbrush format – proving again Chris Evans’ enduring influence on Saturday evening television nearly a decade on. In the first series, there was also a role for a former staple of TV light entertainment. Jeremy Beadle appeared in a slot where he was holed up in a bunker and joined each week by a member of the public to compete in a task to win prizes. It even had it’s own ITV2 spin-off show, Banged up with Beadle.

“They asked me to be locked away on this island,” remembered Jeremy Beadle in 2004, “and I realised what the idea was, you know – the brand Beadle, let’s lock him up – I knew what it was all about. I know that I can handle all the mind games that they want to throw at me. They gave me a member of the public each week and together we were going to learn a skill. And it was meant to be dreadful and it was pretty dreadful, it was cold and it was damp and it was dark and it’s cold, but I had a great time.

“Each week it was live on …Takeaway and we had to perform a task. We had six and we won five, where each of the contestants won five thousand pounds, which was a life changing amount of money for these people.  So it was very important to me. On the first week, we had to do a yoga position and the experts said we didn’t do it properly and I thought they were playing a joke on me, so I was very calm about it, and I was waiting for the producer to say ‘oh don’t worry it’s all been a joke’, but that didn’t happen.

“I then made it very clear that unless that person got their money I was walking.  The producer came down, and so did the exec and Claudia Rosencrantz [Controller of Entertainment for ITV]. They made it very clear that the expert had got it wrong and I was delighted. I felt that was going to be great for Ant and Dec because they’re going to show that they’ve got heart. It made for great television. And of course the excuse to go into these ridiculous yoga positions in the first place was to show my fat arse on the screen. So they got the laugh as well.”

If Saturday Night Takeaway didn’t set the world alight, it managed to make it to the end of the run in one piece. It was also recommissioned for a second series starting in January 2003. This run ditched the Beadle exploits and also slimmed down the “Win The Ads” game so it was played entirely in the last five minutes rather than running throughout each episode. The spare time was given over to new features with Ant and Dec’s personalities at the fore. “What’s Next?” was a completely unscripted part of the programme where each week the du0 would be confronted by a stunt or game they had no knowledge of and had to participate in there and then – plenty of scope for banter and embarrassing situations.

“Ant and Dec Undercover” saw them don prosthetics for a hidden camera stunt. The first few instalments were split equally between surprising fellow celebrities and members of the public whose friends and family had nominated them, but the latter were quickly phased out. Here the antecedent was obviously the Gotchas on Noel’s House Party, but by taking advantage of Ant and Dec’s bulging contacts books the regularly featured in the tabloids due to their big name subjects. Meanwhile two child actors from Newcastle were dubbed “Little Ant and Dec” and were deployed to interview celebrities at press junkets with a blend of innuendo and rudeness that regularly delivered easy laughs. Obviously the series traded heavily on Ant and Dec’s personalities and the ideas the production team came up with – Noel’s House Party being a testament to how quickly a light entertainment show can run out of steam. There was less chance of this happening on Takeaway, though – especially as the duo’s other commitments (fortunately for the commercial channel, all on ITV) meant there was more than a year’s gap before the third series.

Ant and Dec were now billed in Takeaway’s closing credits as “Creative Consultants,” showing the regard ITV held the duo in. With Cilla Black on her way out, and Who Wants To Be A Millionaire’s audience declining since its heyday, they were ITV’s two most bankable stars, and the only ones that seemed able to guarantee a huge audience. This was again illustrated in early 2003 when Matthew Kelly asked to be “released” from his duties on Stars In Their Eyes after he was arrested on charges of child abuse – which inevitably led to doubts over the future of yet another ITV light entertainment institution. Davina McCall stepped in for a run of specials and Cat Deeley was employed to front Stars In Their Eyes Kids, a series spun off from a previous one-off special (which in itself highlights how much ITV were trading on their popular brands). Kelly was completely cleared of the charges, but later announced that the next series of Stars In Their Eyes would be his last as he wanted to go back into acting.

Next Monday: A name in search of a series