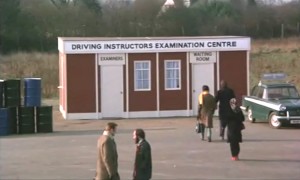 This gets a little technical, but bear with us, there is a point to it all somewhere. Dating decades by the film or video stock they’re most often recorded on isn’t an exact science, but it’s a fair rule of thumb that if it fuzzes with not-quite-there-yet video brightness, the programme you’re watching is from the ’80s, when video cameras first stalked the land outdoors as well as in. Likewise, if it’s not in black-and-white, your ’60s or ’50s film will most likely be shot in the elaborate and much-mourned Technicolor process, producing those hot pinks and azure blues that make everything look like an all-American advert for the latest ‘frigidaire’, even if the subject is just Cliff and Hank Marvin trying to chat up Una Stubbs on the first bus out of Borehamwood.

But in between – what, exactly? Think of ’70s films, those murky browns and very deep greens, grainy shots of traffic, skies that look overcast even when the sun’s out. That’s Eastmancolor, Kodak’s cheaper rival to the elaborately processed, lighting-hungry methods of the Technicolor boys, which had all but ousted its rival by the end of the 1960s, bringing costs down, and the colour palette with it. Purists moaned their usual low moans of aesthetic doom, but look at it this way – is there a more honest way to depict those times? Grainy, brown-tinged, and seemingly half faded away even when the film’s just come back from the chemist’s – well, those are our memories of the 1970s, at least. (Except when we went indoors, of course, when everything suddenly became really bright and colourful, and in front of a studio audience. But that’s another story.)