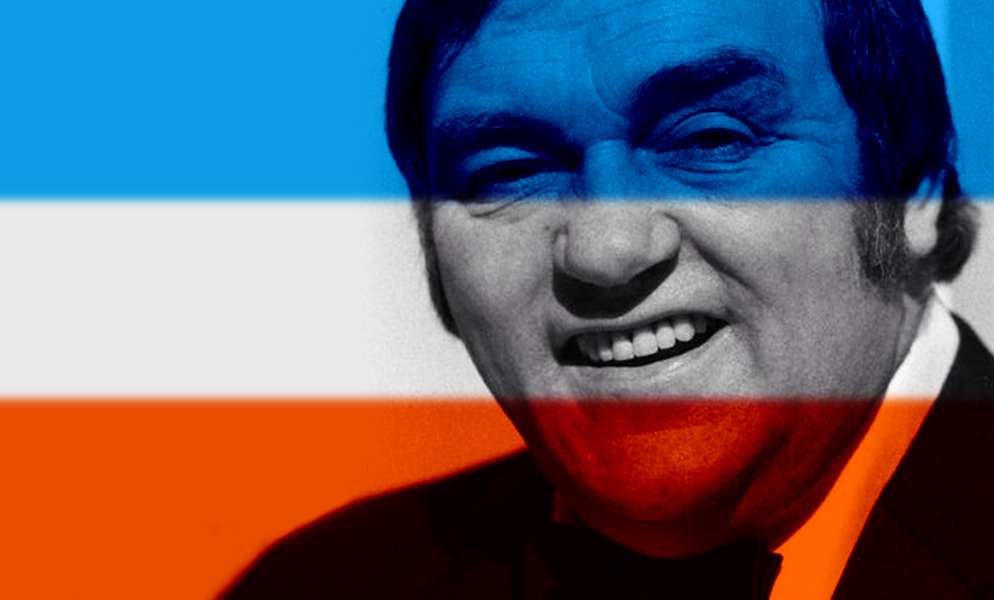 1984 was a year of change in front of the camera. Simon Cadell was replaced in BBC1’s Saturday evening nostalgic sitcom Hi-de-Hi! by David Griffin, while Les Dennis and Dustin Gee made the transition from supporting roles in Russ Abbot’s Madhouse to their very own series for the BBC. The Laughter Show began at 6.30pm on Saturday 7 April, with viewers invited to “join those two brilliant comedy impressionists Les Dennis and Dustin Gee along with comedian Roy Jay, that ‘Slither Hither, Spook Spook Man’ for television’s fastest and snappiest laughter and music show.”

The duo was also joined in their first series by resident guests Hale and Pace (then perhaps best known for their very loose affiliation with the rising crop of alternative comedians), and the show developed a blend of impressions and slapstick that wasn’t far removed from the kind of comedy their colleagues at the Madhouse were continuing to churn out. It was a hit (just one year later it would reach over 15 million viewers), although never a critical one. In fact, in years to come, the show would become, for many, the ultimate representation of all that was outdated and irrelevant about mainstream British comedy. However, the its trademark ending (in which Gee and Dennis, via the magic of Quantel attempt to say goodnight to “each and everyone” of us) lives on in the memory.

Most notably though, 1984 would be the year when Terry Wogan would write his last cheque for Blankety Blank. “From the start I loved it,” he recalls. “At last, I was not trapped in a tuxedo, or behind a desk. The ridiculous microphone gave me something to do, with at least one hand. I could walk and talk where I liked, without looking for marks on the floor … Blankety Blank was the first time I felt as easy in front of a TV camera as I always had before a radio mike.”

Although hitting its peak back in 1979 (with one episode being viewed by 23.3 million viewers), Blankety Blank had done well during the early part of the 1980s (during which time it had been moved to a Saturday night slot). So there were 11 million viewers at stake when Wogan (due to other commitments) decide to leave. Les Dawson’s arrival in the autumn of 1984 seemed a strange move. The urbane, easy banter of Terry Wogan was a pole apart from the down-to-earth, hangdog demeanour of Dawson. “It’s not an easy show to do,” remarked the comedian at the time. “And Terry is a hard man to follow. He had his own style and it would be a waste of time trying to be a clone and copy him. You have to put your own stamp on whatever you do and find your own style”.

Born in 1933, Dawson had started out as a writer (going so far as moving to Paris for inspiration), before turning to playing the piano to earn a living. He drifted into comedy by chance, developing his act to contain more and more one liners and asides. His breakthrough came in 1967 when he won an edition of Opportunity Knocks. This early television exposure was followed by an appearance in a 1968 episode of the BBC’s Comedy Playhouse strand (“State of the Union”), and then his own long running series for Yorkshire Television, Sez Les (1969 – 1976). Dawson remained loyal to Yorkshire until 1978 when he switched allegiances to the BBC for The Les Dawson Show (1978 – 1989), The Dawson Watch (1979-1980) and of course Blankety Blank.

Dawson’s stint on Blankety Blank coincided with perhaps the best episodes of the series’ long run. However, the initial reaction was tepid. “It took a month to win the critics over,” he recalled in December 1984, “and it was very satisfying when it happened”. Even Dawson’s wife, Meg, had choked at the idea of her husband taking over a television vehicle so strongly associated with one person. Her trepidation rubbed off. “I was a little doubtful when it was first suggested and that is why I insisted on doing two pilots that never went out before making a final decision,” he explained. “I wanted to make sureit was going to be disastrous”.

“I believe you have got to take chances in this business if you want to progress,” he added. “It is true that I have been very successful as a stand-up comic but I feel that you need to change what you are doing now and again. Blankety Blank seemed a great opportunity to do something different although there were obvious pitfalls. The main one was that however good I was I would be compared unfavourably with Terry. But I decided to go ahead and do it my way. There would have been no point in setting out to be a clone. And I stuck by that even when things weren’t going well. It was the old thing of being true unto yourself. I always try to ignore the critics and leave the public to make their own minds up.”

In fact, the self-mockery introduced by Wogan suited Dawson’s self-deprecatory style. In addition, Dawson’s gentle ridiculing of contestants and celebrities seemed a logical extension of Bruce Forsyth’s presentational style of The Generation Game, and a precursor to Michael Barrymore’s famously rude attitude towards members of the public. All in all, Blankety Blank was a perfect platform for Dawson to perpetuate running gags, slip in bits and pieces of his highly polished routine and demonstrate his absolute mastery of the medium.

None of Dawson’s episodes would be broadcast in the programme’s by now traditional Saturday night slot, however the show fared well on Friday evenings drawing in 14 million viewers at its peak and running successfully until 1989. Some years after the BBC called time on Blankety Blank, they began to consider producing a new series. Terry Wogan was approached once again (as Dawson had died in 1993), but wisely realised that – not only would this be a retrograde step for his career – but he would now run the risk of being compared unfavourably with his predecessor. Consequently, it would be another four years before Blankety Blank would return to our screens. Rather like The Generation Game, this often maligned game show is destined for continual re-discovery.