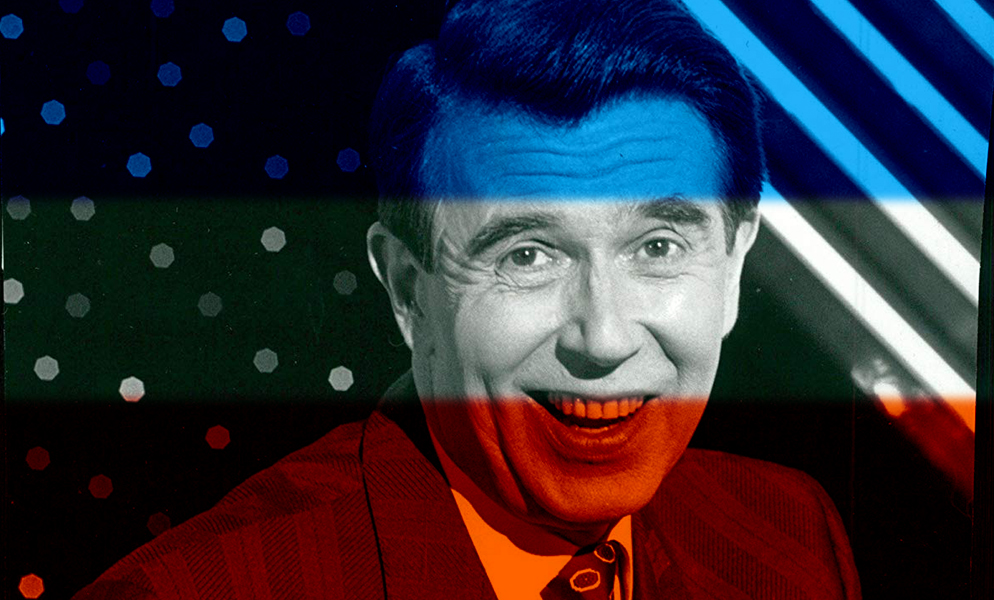 And so into the 1990s. Almost none of the programmes that inhabited the Saturday night schedules at the beginning of the decade would remain in place by its end, and for those few programmes that did survive – such as Blind Date – they would arrive at the new millennium battered, stripped of viewers and clearly on their last legs . However, there would be one exception. One series alone would last the entire duration of the decade and emerge into the new millennium as a popular series with a creditable future ahead. Granada Television’sStars In Their Eyeswas one of ITV’s key Saturday night weapons.

Since the demise of The Price Is Right, its host Leslie Crowther had found himself struggling with personal demons. In particular his addiction to alcohol was gaining an increasingly tight grip on his life, culminating in a humiliating experience at a fêtein Glastonbury he was booked to open. Very much worse for wear, Crowther somehow managed to make a speech and carry out the most cursory tour of the stalls, but he realised that his drunken state was apparent to everyone. The humiliation of this realisation spurred him on to seek professional help, and soon he was in touch with his local branch of Alcoholics Anonymous.

Inevitably, news of his condition reached the newspapers and Crowther found himself front page on both the Sun and the Daily Mirror. Unsurprisingly work began to dry up. “Who would employ an ex-alky with lowered self-esteem,” Crowther pondered? “Well luckily I was a firm favourite with Christine Williams, the producer of Crosswitson Tyne Tees TV, and she invited me to do a week’s guesting on the programme. There was little else, apart from a series of Allied Carpets store opening, which I enjoyed, and a few cabaret dates.” However, Crowther’s old contacts in the business would eventually come good. Jane McNaught, who had been production secretary on The Price Is Righthad since worked with Dianne Nelms, chief of Light Entertainment at Granada Television to devise what was to become Stars In Their Eyes. Based on a Dutch series, McNaught and Nelms felt that with some refinement of his image, Crowther could make a suitable host for the British version (after a largely unsuccessful pilot presented by Chris Tarrant dissuaded them from using the ex-OTT frontman).

So gone went Crowther’s trademark spectacles and floppy haircut, and in their place came contact lenses and a new slick back hairstyle. Gone too, was Crowther’s famous “Come on down” catchphrase (it was apparently deemed too common by his wife). Crowther’s new series demanded a slightly upmarket approach, and furthermore a kind of empathy that one did not expect to find in the bellowing host of The Price Is Right.The format of Stars In Their Eyesis simplicity in itself and was set in stone very early on. It remained pretty much unchanged over the last decade and a half (although the original programmes consisted of 4 acts in 30 minutes, which has since been extended by an extra act and 20 minutes as the series has grown in popularity), and it quickly outgrew the reservations that greeted its debut. At the time it was difficult not to consider the show (which consisted of members of the public impersonating famous singers) merely a less artistically valid version of Opportunity Knocks (were such a thing possible). The first edition was broadcast on 21 July 1990 and featured James Del Giudice (a George Michael impersonator), Maxine Barrie (the eventual first series winner as Shirley Bassey), Jackie McFall (Madonna) and Jimmy Jermaine mimicking Cliff Richard.

Just like Dave Wolfe (the winner 10 years earlier of ITV’s Search For A Star), Maxine Barrie at least was able to maintain a decent career off the back of her Stars In Their Eyes triumph, yet like the comedian her publicity still made much of her talent show victory years after the event. “They’re all great. It’s one of the best shows I’ve ever worked on,” Crowther commented in 1990. However five years later he was willing to elaborate on his relationship with the performers. “My job was to make them feel at home – a job which was made easy by the production team … Among the many multi-talented guests I reckon that the best three – and incidentally the three series winners – were Maxine Barrie, who was a fabulous Shirley Bassey; Bernard Wenton, a great impersonator of Nat King Cole; and Amanda Normansell, a Welsh schoolgirl who was a brilliant Patsy Kline.”

Over the years, Stars In Their Eyes inveigled its way into the public’s shared grammar as only truly popular series can. Bookmakers cited the series finale as one of their most popular non-sporting betting opportunities, and the iconic entrance through the triangle –shaped door is one of those television moments which is forever prefaced on celebrity editions with the words “I’ve always wanted to do this”. In fact, celebrity editions were one of the few evolutions the series ever undertook (plus a kid’s version). However, undeniably the most important change in Stars In Their Eyes history was the one that was enforced upon the programme thanks to tragic circumstances.

On Saturday 3 October 1992, Leslie Crowther was driving back from yet another Allied Carpet store opening when his car hit the central reservation of the M5 and rolled several times down the verge. Crowther’s injuries were extensive including serious damage to his head. Granada Television was forced to seek a replacement (initially it was said while Crowther recuperated). Although there was talk of Russ Abbot stepping into the fold this did not amount to anything more than the comedian hosting an Elvis Presley special in 1993, and so it was the arrival of Matthew Kelly that undoubtedly sealed Stars In Their Eyes’ long-term success. Not that Crowther was poor as a presenter. Somehow though he did seem to lack the genuine empathy that Kelly was able to bring to the show. Similarly, as Stars In Their Eyesbegan to feature impersonations of more and more diverse acts from the world of pop music, Kelly could just about get away with congratulating a performer on his impersonation of Axl Rose, but Crowther surely would not have been able to pull it off. Of course, Kelly contributed perhaps Stars In Their Eyes most well-known aspect – the immortal line “well tonight Matthew, I’m going to be … ”

Crowther never made a full recovery from his accident and his future appearances on television were few and often faltering. He died in September 1996 from heart failure with his family at his bedside. Undoubtedly his had been a respectable and diverse career spanning several decades, and a life filled with more than its fair share of ups and downs. According to his friend Michael Bentine, Crowther never made a single enemy in all the years he worked in show business. Given the vanity and egotism that often breeds within “the biz” this is certainly no mean achievement.

Next Monday: It were a right smack in the face