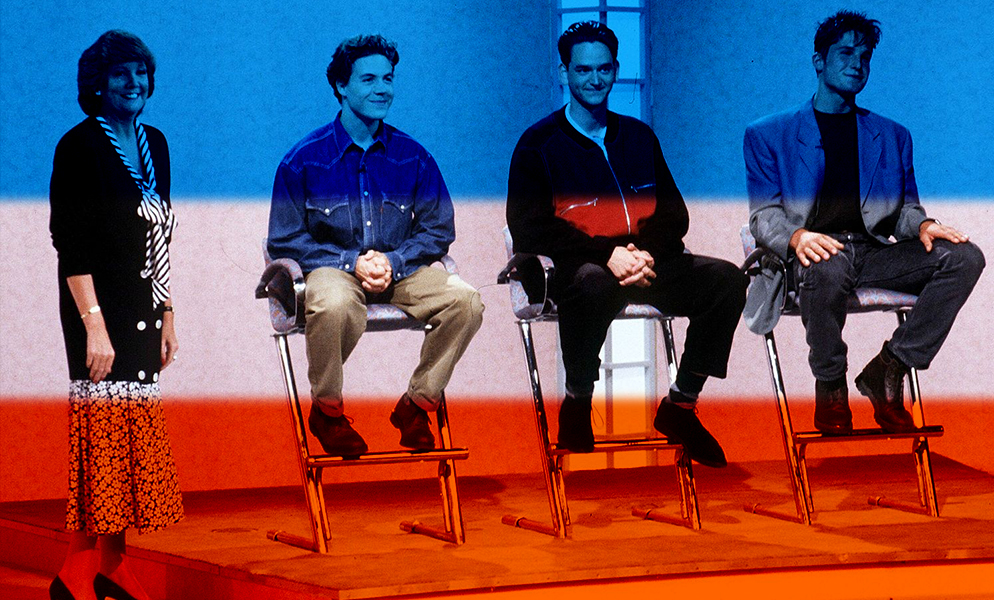 Over the years, Blind Date gave early television exposure to Amanda Holden (who appeared in 1990), children’s TV presenter Ortis Deley (1995) and TV presenter Jenni Falconer (1994). However, one of the first, and most memorableBlind Datediscoveries was Paul Nolan, who appeared on the show in 1987, punctuating his performance with impressions of Bruce Forsyth and general larking around. “All the others thought: ‘This is going to make me a star,’” he recalls. “But I got on the show by accident because a girl I knew was going in for an audition and I went along too. Obviously a lot of people liked me.”

Like many of the show’s extroverts, the picker chose Nolan mainly due to the collective will of the studio audience. “Paul was the popular choice,” recalls Karen Mason. “He delighted the audience with his impressions of showbiz personalities. When I first heard him from behind the screen I thought, ‘What a fantastic personality’. He was very bubbly and the audience loved him. They’d have strung me up if I hadn’t chosen him. They went wild with excitement when I said I was going for contestant number one.” Inevitably, the couple returned from their date the following week having found they were not a perfect match.

However, off the back of his TV debut, Nolan was able to secure a number of appearances on other television programmes before landing the role as presenter on the short-lived ITV music show The Roxy. He then apparently blew all his cash on “booze and holidays” before settling down in Newcastle to run an entertainment business. “If I’d played my cards right I could have been rich and famous,” he reflect, “but it’s not really for me.” He was invited back to the series to appear in a 1997 video-only retrospective of the show’s first 12 years. Blind Date was able to use the Nolan-Mason episode (and Nolan’s brief subsequent period of fame) to secure the kind of press coverage that would prove to be a pivotal element of the show’s enduring popularity.

In this regard, Blind Date again broke new ground and established a relationship with the tabloids that would later be developed by other reality television shows. Typical of Blind Date’s collusion with the press was the coverage given to two contestants who appeared on the show in 1997. While a genuine romance seemed to be blossoming between Andrea and Piers (culminating in a marriage proposal), the Sunday papers did not take long to uncover that Piers was – in fact – still legally married. The story entitled “Blind Date Rat Hasn’t Even Sent Christmas Card To His Baby Girl – Anguish of Struggling Ex-wife” obviously spelled the end for Andrea and Piers nascent relationship, but was still good publicity for the show.

Other stories produced happier outcomes; such as the episode in 1988 that pared up Alex Tatham with Sue. The couple’s marriage in 1991 provoked blanket coverage in the popular press and a special edition of Blind Date that was watched by 17 million viewers. This was followed in 1994 by the marriage of “golden oldies” David Fensom and Lillian Morris, who also first met on the programme.  When Cilla died in 2015, the Tathams – still married and approaching their 25thanniversary – were amongst those that paid tribute to their “fairy godmother”

Over the years, the producers of Blind Date came to realise the extent to which press coverage could sustain the show’s ratings and, while never publicly supporting their exposés, they ensured that an almost continual stream of stories emanated from the production office. Generally, such leaks fell into one of three categories; accounts of outrageous behaviour at an after-show party, aspects of the contestants’ pasts (preferably of a sexual or criminal nature) that had been concealed from the production, or examples of the Blind Date crew rigging the selection process.

The latter remained a staple element of press attention, and while any number of cads, ex-strippers and even vicars came and went, the perennial fascination lay in trying to determine how staged and contrived Blind Date actually was. The programme thrived on witty or ribald exchanges and so it was critical that contestants were able to produce the goods week after week. It was acknowledged that the three hopefuls waiting to be picked were supplied with the picker’s questions (or a close approximation of them) well in advance of the recording. “The whole show is planned down to the last detail,” recalls contestant Steve Parks. “It’s even rehearsed beforehand. Those quickfire answers from the contestants aren’t always what they seem. The producers can’t afford to have people going blank because they record the show at one go. Me and the two blokes I appeared with spent the whole afternoon practising the snappy answers to questions … What we wore wasn’t left to chance. I was told to bring along several outfits and to try them all on in front of the cameras, so they could test what they would look like on a TV screen.”

Little pretence is made to suggest that contestants are actually offered a genuine choice of destinations for their date. The truth is that the level of co-ordination required at the date location is such that preparatory work has to take place well in advance of the contestants even appearing on the show. Increasingly, LWT grew more and more relaxed over the series’ contrivances. However, in 1997, Nicola Gill discovered that those who tried to pry too closely into the affairs of Blind Datewould incur the wrath of Cilla Black. A journalist for the Daily Star, Gill succeeded in creating a false identity for herself that she used to successfully audition for a role as picker on the show. Gill’s intention had been to write an exposé of the series; however, unfortunately for her she happened to attend the same party as a Blind Date researcher. Oblivious of this fact, Gill discussed her ruse with the other partygoers.

By this time, Gill’s date had taken place and so there seemed little LWT could do about it. It was decided that Cilla would confront the undercover journalist, live in front of the studio audience. The showdown revealed Cilla to be a steely character: “That was a load of fibs you were telling wasn’t it Nicola?” she began “You said you like surprises. Well I’ve got a surprise for you. You’re not a temp, are you? There must be hundreds of girls out there who would love a chance to come on this show, and you’ve deprived them of that chance. How do you feel about that, Nicola?”

Next Monday: Is there some way to play with the internal constituent parts?