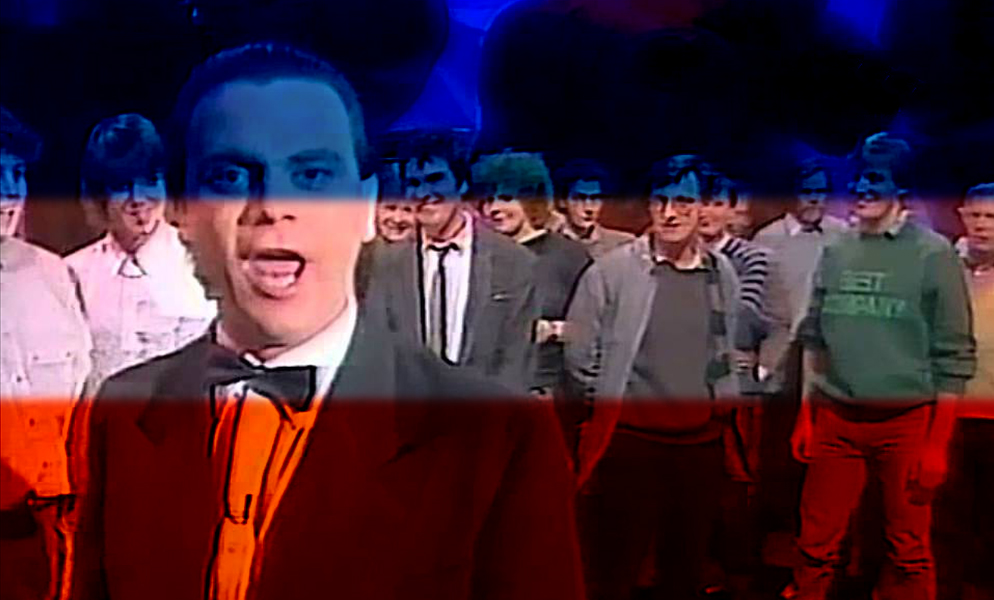 Saturday night television in the 1970s and 1980s belonged jointly to BBC1 and ITV. These two goliaths slugged it out, ensuring BBC2 and, later, Channel 4 never got a look in. Entertainers such as Bruce Forsyth and Bob Monkhouse might flit from BBC1 to ITV and back again, but this only served to further demonstrate the strength of the two channels’ duopoly on Saturday nights. Most weeks, the other two completely opted out of the ratings battle.

For example, a typical Saturday evening on BBC2 in 1984 would begin with a 25-minute documentary on a respected artist, followed by a 55-minute rock concert, perhaps presented by Steve Blacknell. This would then be followed by a long documentary (in the case of BBC2’s schedule on 3 March 1984 a 110-minute Arena: Special on Sunset Boulevard) taking us through to late evening and a foreign, or black-and-white film. Channel 4’s schedule was equally as inhospitable to the casual viewer looking for a dose of light relief.

In fact, during Channel 4’s early years its only concession to populist entertainment on a Saturday evening was the inclusion of an omnibus edition of Brookside (its flagship soap opera) usually at around 5pm. Although this broadcasting decision was revolutionary (marking the first regular same week repeat of a popular drama and flouting the perceived wisdom that British soap operas should not be scheduled on a Saturday night), the impact upon the viewing habits of the Saturday night television audience was insignificant. However, in 1985 Channel 4 almost unexpectedly found itself with a programme that, while only ever attaining around 10{30e2395aaf6397fd02d2c79d91a1fe7cbb73158454674890018aee9c53a0cb96} of Blind Date’s average audience, would prove itself to be influential in the development of Saturday night television.

Ever since 1980, alternative comedians had been creeping onto our screens. This was in part thanks to the tenacity of Paul Jackson, then a producer at the BBC. His seminal two 30-minute episodes of Boom Boom … Out Go The Lights (1980 and 1981), weren’t greatly received at the time (the audience appreciation index for the first show was just 33{30e2395aaf6397fd02d2c79d91a1fe7cbb73158454674890018aee9c53a0cb96}), but gave early television exposure to (amongst others) Rik Mayall, Nigel Planer, Adrian Edmondson, Alexei Sayle and Peter Richardson. Jackson had previously worked on mainstream series such as Cannon and Ball and The Two Ronnies, but throughout the 1980s he would be responsible for not only bringing important new comedy talent to our screens, but for legitimising and updating existing mainstream comedians, including Jasper Carrott (Jackson oversaw the comedian’s reinvention as a relevant and – at times – political comedian on the 1982 series Carrott’s Lib) and Lenny Henry (whose career was effectively re-launched with 1981’s Three Of A Kind).

It was in the pursuit of bringing new comedy to the masses that Jackson really excelled. The Young Ones broadcast in 1982 established a serious appetite for alternative comedy on British television and Jackson followed it up in 1983 with Channel 4’s The Entertainers. This seven-part series was similar in scope to Boom Boom … Out Go The Lights presenting live performances of up and coming alternative comedians. Ben Elton, Chris Barrie, Paul Merton and French and Saunders all appeared (although the episode featuring Dawn and Jennifer had to be transmitted at 11.25pm instead of the usual 8.30pm thanks to the inclusion of the word “clitoris”).

By this time alternative comedians were also gaining exposure on mainstream Saturday evening television. In 1982 Alexei Sayle had enjoyed a short-lived regular slot on Central Television’s OTT while the following year Tony Slattery appeared on Saturday Stayback. In 1984, Hale and Pace appeared regularly on BBC1’s The Laughter Show and featured in Paul Jackson’s next programme for up and coming alternative comedians – Pushing Up Daisies. There was a groundswell of interest in what seemed to be an endless supply of exciting new comedians and they were encroaching upon mainstream areas of television.

Central Television’s Girls On Top was a watershed. Broadcast on ITV in 1985, it represented the first truly post-Young Ones comedy series to appear on Britain’s most mainstream, populist channel. However, earlier in the year another – even more important step in the evolution of alternative comedy had taken place. “The most thrilling, most sublime and important entertainment programme of my time as director of programmes at LWT was Saturday Live,” recalls John Birt. The series owed its genesis to Birt’s desire to attract new and different audiences to LWT (perhaps in a bid to impress the IBA who were then in the middle of their mid-term review of the station’s franchise). To this end he recruited Marcus Plantin from the BBC and asked him to come up with some new programme ideas. Plantin had directed and produced some of the BBC’s most popular series such as Wogan, The Two Ronnies and more, recently,Bob’s Full House. He might have seemed an unusual candidate to foster cutting edge talent, but there was certainly no doubt that Plantin had the experience and talent to handle a live Saturday night television series.

Birt’s desire to innovate appealed to Paul Jackson who pitched an idea for a new live show that would bring the best of the burgeoning London comedy scene to our television screens to form a selection of acts that would be “the best comedy since Beyond The Fringe”. It would also owe more than a little to the hit US series Saturday Night Live. Having proven himself with Carrott’s Lib (which many people in the industry could not believe was broadcast live such was its slickness) there was a confluence of desire and talent at LWT that made Saturday Live inevitable. Birt obviously excited by the idea agreed to a one-off special that would be shown in January 1985 and would serve as a pilot for a potential series proper.

Next Monday: The most important entertainment programme of my time