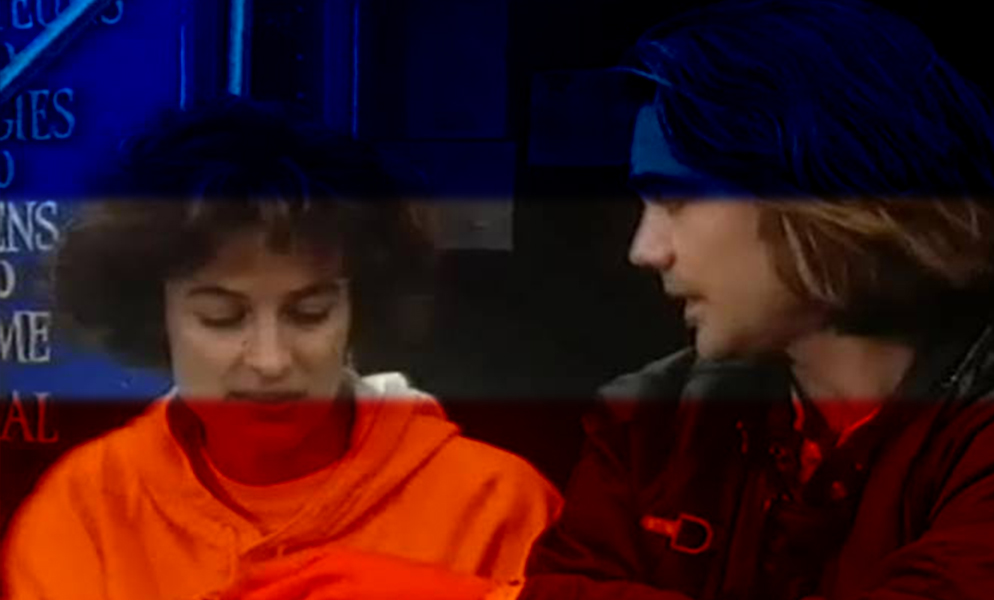 Also joining Big Break on Saturday evenings in 1992 was a former Sunday night staple, That’s Life! Esther’s show was taking up the post-watershed slot on Sunday evenings for six months of the year, but with declining viewing figures, it was felt by BBC1 controller Jonathan Powell that a Saturday slot might be more appropriate, allowing the channel to screen more adult drama on an increasingly important night of the week. The first drama to take That’s Life!’s Sunday slot in January 1992 was Melvyn Bragg’s controversial A Time To Dance. In fact, That’s Life! had actually begun life on a Saturday evening in 1973, only moving to Sundays in the late seventies. Yet despite spending three years on a Saturday this second time around, Esther and the boys never really felt at home there – it was much earlier in the evening than its previous Saturday berth, and it was hard to conclude that viewers watching on a Saturday evening were looking for 45 minutes of consumer journalism, regardless of how entertainingly it was presented.

Further problems for BBC1 Saturday night came in the form of Moon and Son. Created by Robert Banks Stewart and starring Millicent Martin as a psychic investigator, the series was a flop from day one and, after some mutterings its “adult” content, the show was hastily ejected from 8pm and moved to after the watershed.  Its old slot was filled by ancient repeats of Columbo. Moon and Son was one of a long list of unsuccessful dramas that BBC1 had attempted to launch on Saturday evenings since the rescheduling of Casualty in 1988. The House Of Eliot, which had been tried out on Saturday evenings in the autumn of 1991, was considered the most successful yet, but period drama- such a reliable genre in the seventies – was now wrong for Saturday evenings, and the subsequent series went out on Sundays.

In the end, the BBC cut its losses and, from September 1992, brought Casualty back to Saturdays, with the run extended from three to six months. This wasn’t originally the plan though. In 1991, with BBC1’s overall audience share declining from the highs the aided mid-80s, numerous meetings were held to try and arrive at a more effective schedule. Envious glances were cast at ITV, who had successfully turned The Bill from a short-run, hour-long weekly series into a twice-weekly, half-hour show running all year round and providing the channel with a reliable ratings success. The BBC decided to do the same with Casualty, scheduling it twice a week at 8pm to entice people over to BBC1 just as Coronation Street ended. However, Director General Michael Checkland vetoed the plan due to the imminent arrival of Eldorado. The DG was concerned there would be too many soaps and soap-like dramas on BBC1. As something of a compromise, Casualty’s run was extended and promoted to pre-watershed Saturdays.

With the return of Match Of The Day in August 1992, and the continued success of Noel’s House Party, suddenly BBC1’s Saturday schedules were more popular, more logically ordered and more consistent than at any point in the previous decade. The second series of Noel’s House Party, starting on October 24, was an even bigger success than the first. The most obvious reason was the arrival of Mr Blobby, who made his debut in the first programme of the new series. The rise of Mr Blobby is one of the more convoluted aspects of Saturday night television in the 1990s, given the character started as a parody of a children’s television character, and then became an actual children’s television character. At the start, he was used as a crutch to hang a few Gotchas on, with the likes of Wayne Sleep (his first victim), Garth Crooks and Valerie Singleton drafted in to take part in a spoof TV show, explaining various topics to young viewers, while Mr Blobby (with Noel in costume) caused chaos throughout. Within 12 months, he’d become a star, as proven when Noel took the House Party on tour to various racecourses around the country in 1993, and Blobby was mobbed. By the end of the year he’d scored a number one single.

Not all of the BBC’s new Saturday night ventures were as successful. The biggest flop of the year came from Public Enemy Number One. In this, Bobby Davro would welcome four celebrities into the studio, who would attempt to predict how many people would fall for various pranks. If they got it wrong, various embarrassing clips and forfeits would be forthcoming. With hidden camera stunts involved, it was no surprise the word ‘Beadle’ loomed large in the previews, someone Davro was keen to distance himself from – “As soon as people hear that it’s a practical joke show, they say it’s going to be like Beadle. The humour of Beadle – and it can be funny – comes through humiliating people, which can be cruel. This show is not like that.”

Perhaps a little more savagery would have been helpful in a show that completely failed to stick in people’s minds. The celebrity panellists featured the likes of Paul Shane, Peter Stringfellow and Keith Chegwin, and the stunts included Davro dressing as a sheepdog attempting to round up a flock. After six shows the series ended and never returned. Public Enemy Number One only really had two lasting legacies. The first came at the end of the series when the various celebs got their own back on Davro by placing him in stocks – which, unfortunately, were rather shoddily assembled and caused the presenter to plunge to the floor, breaking his nose in the process (though the show now lives on in BBC internal health and safety videos). However perhaps the series is now most notable for hiring a local radio DJ to act in the stunts, thus giving Dale Winton his first exposure on Saturday night television. Davro’s next BBC venture was based on his touring variety show, Rock With Laughter, but after being pencilled in for January 1993, it was then abruptly dropped from the schedules, as was the case on another three occasions.

Next Monday: To allow such bilge on TV is an insult to the audience