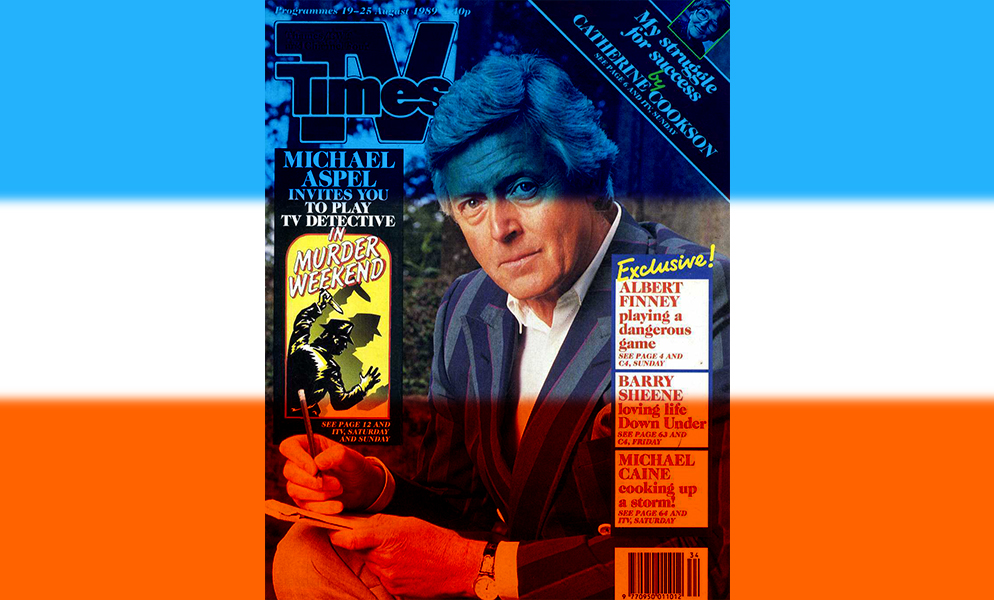 The concepts of strip-scheduling, and reality television, not to mention the idea of having members of the public becoming immersed into a fictional community in an attempt to solve a make-believe murder, all sound like 21st-century television innovations. We could be describing BBC1’s 2003 Saturday night Reality game show, The Murder Game. However back in 1989, ITV were prepared to strip the weekend schedules in order to accommodate an ambitious free-form game show in which Michael Aspel and 24 members of the general public would attempt to solve a fictitious murder.

LWT’s Murder Weekend was devised by the creator of murder weekend holidays – Joy Swift. Her involvement in a television production came about as a result of a chance meeting with a television executive who happened to take part in one of her events. “He came to me on the Sunday and said it would work well as a television format,” recalls Swift. “I had been doing these Weekends for 10 years by that time and I couldn’t see why television viewers couldn’t participate in something like this”.

Recorded at Lainston House Hotel, near Winchester, Hampshire, the plot concerned a murder at the wedding of Thomas Lainston and Camilla Lawrence, and contained the requisite number of spurned lovers and avenging mother-in-laws to ensure it adhered strongly to the accepted model of murder mysteries (ie. everyone has a plausible motive). Two editions a night were broadcast on Friday 18 and Saturday 19 August with a final live programme following on the Sunday, in which Aspel would lead the party of would-be sleuths through their deductions before unmasking the culprit.

Obviously, a challenging television format to crack, Swift and LWT worked hard on the project and were afforded a more than generous budget. LWT’s Greg Dyke was highly enthusiastic, foreseeing a bright future for what he recognised as an innovative idea. Yet for all concerned, the programme was to present a steep learning curve.

The actors, for instance, required a degree of preparation above and beyond the usual demands for a television performance. “My actors are given all the facts about their characters from birth until now, so that they feel totally confident in the face of questioning,” explained Swift in reference to her regular acting troupe. “In fact it’s not really an acting exercise. Face to face with the audience you can’t fake anything. You have got to be the person at all times, even when you think the guests aren’t watching.” However LWT – presumably concerned with utilising actors with little or no television experience – insisted on using a brand new cast who were not used to Swift’s methods of preparation. “They weren’t so immersed in their characters as my actors. As such when they weren’t involved in a scene they simply stopped playing their part,” she reflects.

The series demanded more from the production team than a usual Saturday night game show too. “Four hand-held cameras and a wild-eyed scrum of guests tumble through the rooms and out of the French windows towards the area from which the scream emanated,” reported TV Times writer Adrian Furness.“As they pass one of the TV technicians, they nearly trample him to an unscheduled death”. The frantic nature of the recording was due to the decision to record events as they happened (as opposed to staging sequences), and although this undoubtedly gave the finished production a certain edge, it also created a number of logistical problems. “All the suspects were mic’ed up and I had a brief blocking to advise what should happen when,” remembers Swift. “I was in a control room flicking between monitors, listening to all the actors and when the guests then made a move to a particular suspect, I was advising where the camera men should be”.

“I have never done anything like this before,” proclaimed Aspel in the middle of the recording. “I’ve always thought that this sort of weekend was meant for eccentrics, but I must say it does grab you. What has astonished me is how realistic it all is, how seriously the guests are taking it, and how determined they are to prove themselves as sleuths. They were up half the night arguing their theories. As for me, I’ve got 12 theories running in parallel, but I’m discarding them by the minute, although I was told that last night I got very warm when questioning the actors. So I said, ‘What was I asking?’ But they wouldn’t tell me and I couldn’t for the life of me remember. Anyway I’m enjoying myself enormously.”

For Swift though, there were a number of concerns with how things were progressing. Although a selection of her regular guests had been invited to take part, the production team didn’t spend enough time following them on their investigations, thus diluting the narrative of the programme. In addition, the decision not to use small, mobile cameras when filming, restricted the ability to move easily from suspect to suspect as the scent of the murderer grew stronger, and created chaotic scenes as the production crew desperately attempted to keep pace with the guests. In retrospect, Swift also believes the action was condensed too much, losing a lot of the intricacies of the investigation. “Of course now with series like I’m A Celebrity, Get Me Out Of Here! you are able to watch live feeds for hours on end if you want too,” she remarks.

One of the other ground-breaking elements of Murder Weekend was the opportunity for the audience at home to interact with the action. “Can you come up with a good solution for the Murder Weekend mystery?” challenged that week’s TV Times. “On Saturday night, by the end of the fourth programme, you will have all the clues necessary to pinpoint the murderer and his or her motives. A phone line will be available from 10.20pm until midnight for you to call in with your solution – which should be the name of the murderer, and in not more than 10 words, the motive. The 24 viewers who come up with the best answer – not necessarily the right answer but the best-argued case for their solution – will be invited into the studio the following day, Sunday 20 August, to join Michael Aspel, the hotel guests and the surviving characters for the live show.”

The viewer interactivity aspect was potentially one of Murder Weekend‘s most appealing and innovative elements. Recognising there should be no reason why the viewer could not fully engage themselves in the investigation, Swift was keen to try and make them feel as involved as possible, and attempted to persuade the TV Times to print a special booklet containing additional clues that would aid their armchair investigation. However, the publication resisted and instead the TV Times printed a series of very brief biogs for each of the main characters in the investigation.

However, the phone-in element was more successful, and on the Sunday morning Swift and the production team sifted through the numerous calls and contacted the chosen few to attend that evening’s live studio show. “The last show was the worst and I was very upset by it,” Swift remembers. “I’d said they should film it at the house where we actually filmed the Murder Weekend. But they chose to do it in a studio with a load of boxes covered in blankets instead. I thought it would have been far nicer to do it ‘Poirot style’, with a voice-over referring to footage the viewer had already seen. That way they would know they hadn’t been cheated – all of the clues had been there for them to see all along.

“Also, the live studio show took place a long time after the previous episodes were filmed, and some of the actors couldn’t remember the intricacies of the plot.” Indeed, alert viewers would have noticed that one of the actors even referred to himself as the brother of the character he was supposed to be portraying, and host Michael Aspel – although a consummate television professional, seemed to have – at best – a tenuous grip on the plot. Nevertheless, regardless of the programme’s shortcomings it still attracted a reasonably healthy 7 million viewers, certainly a figure not to be sniffed at during the summer months.

Yet there was to be no more Murder Weekends for LWT. The production had gone way over budget, and clearly a rethink would be required if the programme’s long-term future was to be assured. “I wasn’t happy with the finished product, as it was further away from my vision than I’d hoped and I hope that one day I will be able to get it back on TV the way I want it and the way I know it will really work,” reflects Swift. Perhaps her idea though was simply ahead of its time. Certainly the BBC thought so, given the aforementioned The Murder Game, yet that series too failed to translate the excitement and fascination that guests at a real murder weekend obviously experience. Perhaps the problem to date has been a simple lack of affinity with the subject matter on the part of the respective production teams. Certainly both The Murder Game and Murder Weekend seemed slightly spoiled by a baffling desire to focus on peripheral issues such as the interactions between the members of the public at the expense of covering the actual investigation itself.

Next Monday: He’s not a goody- goody hero