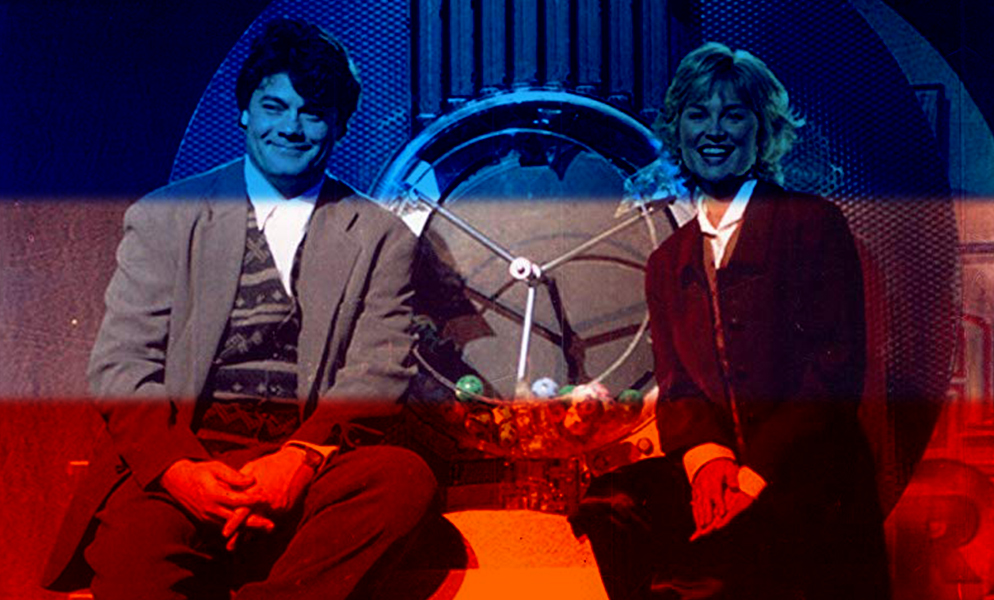 With The National Lottery Live, BBC1 was now the place to be on a Saturday night. Regardless of the merits of the programme, the corporation knew it had a major event on its hands, as the draw was the national talking point of late 1994 and 1995. After the extravagance of the opening hour-long show, from 26 November 1994 the draw took place as part of a 15-minute programme. This was fronted by Anthea Turner, then best known for Blue Peter and GMTV, and Scottish comedy actor Gordon Kennedy. Neither had a particularly high profiles, but the BBC claimed it decided on this to ensure the draw was the star, rather than the presenters.

Arguably, the programme was produced so that viewers would only really watch it for the draw – as straightforward entertainment it didn’t really hang together. The 15 minutes were entirely devoted to lottery news and views, interviewing previous winners, reports on some of the good causes that ticket money would be spent on, and breathless updates on how much money was in that week’s kitty. Then at eight o’clock, the draw would take place.

“We knew that the creation of the National Lottery was going to be big,” says Michael Leggo, then head of light entertainment for the BBC. “We therefore wanted it on BBC1 because it was a national event. That’s where it belonged. So I was one of three people – Alan Yentob and David Liddiment being the other two – who basically spearheaded the attack to get it. But the Lottery on television was a very interesting meeting of different cultures. Because Camelot was constituted to sell lottery tickets, while the BBC is public service broadcaster. So in one sense you are trying mix oil and water. So trying to come up with something that would at least appear to mix for the duration of the programme and be true to the event and contravene all of the values that the Lottery was trying to establish both commercially and from the regulators’ point of view was quite a minefield.”

For the first six months, the programme went out on the road, with the draw presented from a venue that would benefit from the lottery in some way. The first instalment came from the Rhondda Heritage Park in South Wales, and Anthea Turner would later refer to this as one of her worst experiences in front of the camera, with the autocue going down, her earpiece failing, an audience that were too noisy, and the entire programme conducted from outside in the pouring rain.

Yet in a way it didn’t matter, as the British public watched the programme to see the lottery numbers. It’s hard, from a present day perspective, to remember just how many column inches the draw attracted in those early days, but four weeks into the run the simple fact that there was a rollover jackpot saw it make the front pages of the majority of the tabloids, replete with a screengrab of Anthea announcing the numbers. Not that this was really necessary, of course – some 14 million people were watching the show every Saturday.

“The Lottery started off as this big new thing in our lives,” says Michael Leggo. “There was gambling in our lives in a way that hadn’t been there before. And therefore predictably it was a big splash. Sustaining that was always going to be tricky and if you look at the life of a lottery in any other country, it’s a very similar pattern. And different countries deal with it differently. In France they have just a very sexy looking machine with some great music and they play that and the numbers come up. There’s no voiceover or anything. And that’s the way they deal with it.”

This Lottery audience had a huge impact on the rest of BBC1’s Saturday night schedule. If nothing else, it made rather more sense of the scheduling, previously a major problem for the corporation. With the lottery draw fixed at eight o’clock, it was easy to come up with a fixed schedule, with a two-hour block between 7pm and 9pm consisting of Noel’s House Party, the lottery and Casualty back to back more or less every week. The three programmes were pretty much guaranteed at least 10 million viewers per episode. Before them, at 6pm, would normally be another family entertainment show such as The Generation Game or a light import like The New Adventures of Superman. After 9pm, when the competition from ITV was fierce, The BBC would normally screen a TV movie – that would pull in around five million viewers, a fairly good return for the low amount they cost to run. With Match of the Day after 10 o’clock, this was a stable Saturday night line-up for six months; something the Beeb had previously had trouble maintaining.

ITV were therefore on the back foot. Early evenings were still doing alright – Gladiators was flourishing and come early 1995 a series of International Gladiators pulled in enormous audiences of 15 million. Blind Date, too, had held its own against the lottery draw with a guaranteed 10 million plus viewers a week. The real black spot, though, came after eight o’clock, when the Beeb were showing Casualty– for the first few weeks of the lottery draw, ITV screened big budget entertainment specials, such as An Audience with Ken Dodd and It’ll Be Alright on the Night. Yet viewing figures for were unspectacular, so in the end Family Fortunes was brought back – ratings were no more impressive, but it was substantially cheaper. For now, ITV would attempt to lure viewers back post-watershed with big movie premieres and entertainment specials.

While a programme garnering 14  million viewers can never be considered a flop, it was true that the early episodes of The National Lottery Live were patchy, to say the least. The chemistry between Turner and Kennedy seemed non-existent, the endless promotion of the draw was tiresome and the live outside broadcasts were often chaotic. Perhaps the most successful parts of those early programmes were the regular contributions from Mystic Meg. The News of the World’s astrologer was perhaps most famous at the time for her ‘Messages From Beyond The Grave’ column, printing cryptic comments along the lines of ‘Susan from Nottingham – it is in the cutlery drawer’. For The National Lottery Live, Meg made a whole host of pointless predictions, suggesting which star signs and initials seemed particularly lucky that week, and every so often a winner would be dragged on camera to claim her predictions had come true.

But in the main there was little showbiz razzle-dazzle from the draw programme, and a revamp followed in May 1995. Gordon Kennedy was dropped, and Anthea Turner now presented the programme alone from a studio in Television Centre. Radio 2 announcer Alan ‘Deadly’ Dedicoat was brought in as voice-over artist, providing a breathless commentary on the actual draw and offering a wealth of statistics on each ball, giving the latest ‘form’ as if they were greyhounds. Mystic Meg was also promoted, stationed in her own ‘paddock’ in the studio surrounded by clouds of dry ice, and often used as stooge for comedy sketches. There was some brief respite from the previously ceaseless promotion for Camelot, though, as musical guests were now booked to perform their latest singles and start the draw itself. Of course, the fact the show had a captive audience of several million meant that artists were queuing up to appear – although on one occasion Eddi Reader pressed the button with a resolutely off-message “It could be you – it’s definitely Camelot!”.

“I think there was a degree of inevitability that you couldn’t sustain 22 million,” says Michael Leggo. “I don’t think anyone ever expected that. Fantastic for a launch show. It was only subsequently beaten by the Princess Diana interview by Martin Bashir … [But] there are lots of things that you could do with the process of having a lottery, if the regulations weren’t as tight as they are.  Which means you can’t apply all of the entertainment skills you’d like to as a producer.”

The show wasn’t perfect and many of the interviews with syndicates of cleaning ladies dragged, as did the reports on good causes, although for a time these were presented by later Newsnight and Channel Four News host Krishnan Guru-Murthy. Guru-Murthy gave these up after a short period, apparently as his news bosses had asked him to decide whether he wanted to be Jeremy Paxman or Bruce Forsyth.

The most obvious change, though, came in the career of Anthea Turner. While she’d been selected as a virtual unknown, presenting one of the most watched programmes on British television meant she didn’t stay an unknown for very long, Turner now dominated the show from start to finish, chatting up the musical guests and participating in dance routines.

Next Monday: Welcome to the new Saturday night