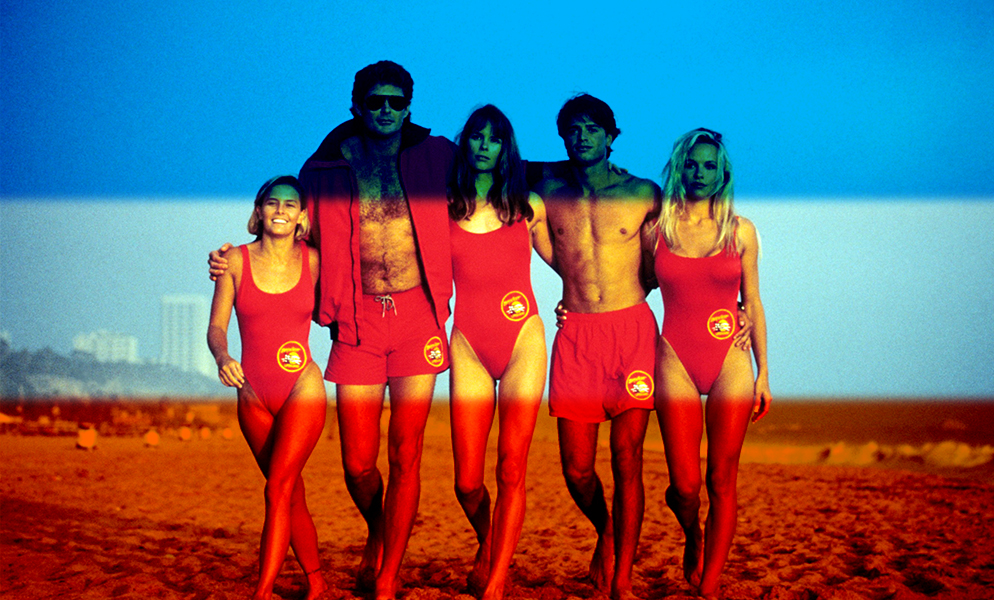 In the early to mid 1980s, the US drama Knight Rider tapped into a period in which adventure series featuring high tec vehicles were popular. Streethawk (a souped up motorbike) Blue Thunder and Airwolf (both souped up helicopters) had played well enough, but Knight Rider had attained a popularity (peaking at 13.1 million viewers) and longevity that the other series never attained. By 1990, Knight Rider was perceived as faintly ridiculous, and its star, outdated. However Knight Rider‘s Michael Knight (alias actor David Hasselhoff) had for the last few years been carving out a singing career in mainland Europe. After taking his act (David Hasselhoff and The Knight Rockers) on the road in Austria, he was signed by a German producer and in 1989 recorded Germany’s best-selling single for that year, “Looking For Freedom”.

Television stardom beckoned once again. “Knight Rider, which is still syndicated in 62 countries, has netted millions of dollars in merchandising and I made nothing,” he reflected in March 1990. “But that has all changed. Now I’ve arranged my affairs to reap the reward of the merchandising that I lost out on that show.” Lesson learned, Hasselhoff would assume increasing control over his new series. Baywatch, the sun-kissed tale of a group of Southern Californian lifeguards looked an enticing prospect to ITV. The series was about daring escapades and saving lives, but there was little violence and almost no guns. What there was though would prove in time to be no less contentious.

“My problem is, unless my double looks better than me, I won’t let him do it,” mused Hasselhoff. “You know, I’ve got an image to think of. If the guy is built like a brick outhouse I say, ‘Let him go’, because it makes me look good. But sometimes I get this other stand-in who’s a little bit bigger than me, and when he runs in the water he’s got this big butt and I go, ‘Oh man, there go all my women fans’. So I say, ‘Come on here, let me do it.'” The IBA was not blind to the fact that Baywatch’s appeal was largely predicated on the sex appeal of its main characters. In its Annual Report, the organisation remarked “The content of the Baywatch series was at time questionable in the earlier part of Saturday evening. Its image of buxom female life-guards and sun lovers on Malibu Beach attracted both a large following amongst younger viewers and criticism from others who found its fleshy emphasis sometime gratuitous”.

Yet, Hasselhoff at least felt the series had much more to offer. “The show started off doing great,” he explained. “It looked as if we were going to get personalised stories, emotional stories, real stories. Then they got into sensationalism as opposed to realism. There’s so much happening in real life on our beaches. Last year lifeguards rescued 15,000 people – think of the stories there. It’s all about getting better, doing good work. It’s a constant battle. It’s not so much fighting my looks, it’s fighting the material that comes my way. With Knight Rider I just settled into going to work, doing my lines, hitting my mark, being charming. I really couldn’t do any heavier acting on that show … I love to work, I’ve got a lot to offer. I don’t want to just go to the beach and collect a pay cheque. And I don’t want to come out of this in five or six years and have people say, well, he talked to a car and then ran down the beach. I need to move on. I want to go for it.”

Baywatch was a big hit for ITV, with 13 million people tuning in to the first series. In fact such was its popularity that when NBC decided to cancel it after poor ratings in America, ITV organised a consortium of contented buyers to pre-finance another series. This ingenious piece of business led to Baywatch becoming the much-vaunted (but one suspects never fully proven) “most popular television series in the world” and provided ITV with six years of decent ratings in one of the most important slots in the schedule.

Next Monday: A Double Order of Talent