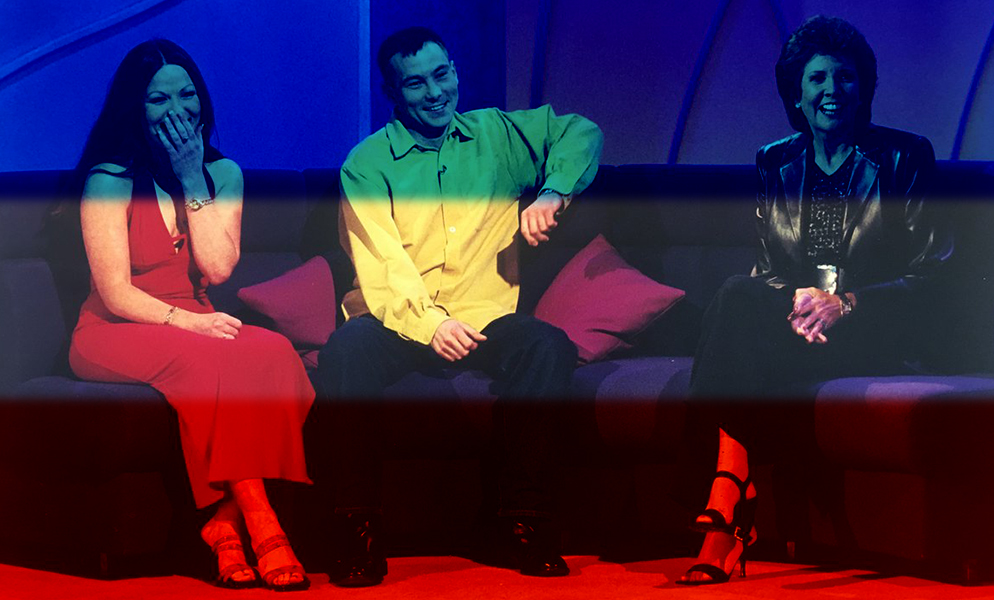 Over the years, Blind Date changed very little. Filmed inserts superseded the photographic montages originally used to represent Blinders’ dates. Meanwhile, Cilla’s ex-Surprise Surprise sidekick Christopher Biggins tried to get a version of the series, featuring gay and lesbian contestants, off the ground, but it came to nothing. Blind Date was one of LWT’s most popular shows throughout the 1980s and 1990s, consistently attracting audiences of 14 million or above and so there was no reason to mess with a winning format.

“In the 1980s, where the commercial pressures were really becoming quite intense, once you had got something that worked, you wanted to have it there for a long, long time, and with a game show or a people show you could do that,” says TV executive David Docherty. “If you have got Game For a Laugh in your schedule or Blind Date and it [runs for] 20 or 24 weeks you breathe a huge sigh of relief.”

For much of the 1990s, Blind Date found itself in competition with the BBC’s Noel’s House Party, yet while the ITV show marched on, effectively unchanged, Noel’s House Partywould constantly introduce new features and gimmicks in an attempt to retain its audience. “You couldn’t beat [Blind Date] and I was there trying,” says Noel Edmonds. “Strong format, fantastic engagement with the audience, broad age range, consummate professional presenting it.”

The arrival of The National Lottery Live on BBC1 on 19 November 1994 looked to be a major cause for concern. Scheduled directly against Blind Date, the first few draws achieved stellar ratings. However it wasn’t to last: “By the end of 1995, The National Lottery Live viewing figures had tailed off to about 15 million,” recalls original presenter Anthea Turner. “The drop-off had always been expected – no one could keep pulling in 23 million viewers every week – and the audience was still high when you consider that nobody had to tune in to get the lottery numbers as soon as they were drawn: if people wanted to, they could just watch Blind Date on ITV and wait for them to pop up on the screen.”

Although Blind Date resisted the challenge of the Lottery, by 1998 audiences for terrestrial television were on the decline and Blind Date wasn’t immune – average ratings were four million down on the series’ heyday. ITV boss Richard Eyre determined that to survive, the network had to maximise the appeal of their most popular programmes and Blind Date was given an increased budget, new scriptwriters and new producers. Discussions began in earnest to revamp the show.

Initially it was decided that contestants would be picked “randomly” from the studio audience. This was discarded in preference of the tried and tested format, but Blind Date entered a period of decline as the production team apparently lost faith in their product. At the same time, Cilla was also deployed to front another LWT game show – Moment Of Truth. While this series was unable to replicate the success of Blind Date, it did appear for a time as if LWT was attempting to line it up as a successor to the aging dating show.

1998 also saw the first concerted rumours emerge that Cilla Black could be heading for pastures new. As the story began to circulate around the media it was speculated that Zoe Ball or Kirsty Young were being lined up to replace her – apparently Cilla’s own choice for a successor was GMTV’s Eamonn Holmes – a figure deemed as “sexually unthreatening” as Cilla herself. Change did eventually arrive in 2002, but it was to the show’s format and not the presenter. “Dating shows – they have to move on,” explained Paul Jackson, then Granada’s director of entertainments and formats at LWT. “We’re trying to encourage people to be more real. Blind Date began in the days of innocence, when people were not so upfront. Kids today are much more prepared to say what they think, to dish the dirt.”

“You face that dilemma,” he reveals some years later, “is there some way to internally improve the show? Because the brand name is still valuable, the host still carries tremendous loyalty and affection. Is there some way to play with the internal constituent parts? … That wasn’t easy with Blind Datebecause I think one of the reasons why it was so successful for 18 years was it’s got a very simple through line – boy meets three girls, picks one, goes on a date – do they get on? It’s a very simple construction, and you play with it at your peril.”

Next Monday: The most important entertainment programme of my time