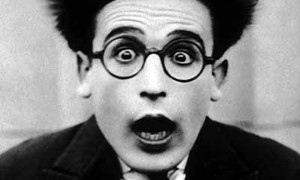 STITCHED-TOGETHER SILENT shorts repackaged in 1980s to fill television half-hour, narrated by the redoubtable Pete Smith in jocular style. “A pair of glasses and a smile.” Harry a) walks into sheet glass being carried by two dopey workmen b) walks into brick wall c) hangs off clock face d) does all of the above simulataneously while eating a bunch of tulips.