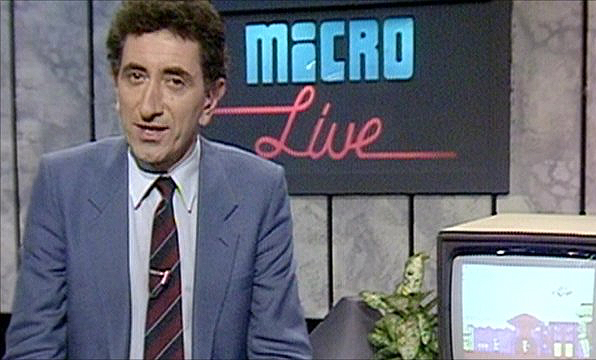 LONGEST-RUNNING AND most imperial of all the Beeb’s home computer shows, this took the semi-estimable IAN MACNAUGHT-DAVIES from THE COMPUTER PROGRAMME and teamed him up with LESLEY JUDD (who, post-BLUE PETER, was becoming quite the proto-Vorderman, what with THE GREAT EGG RACE and sundry schools science programmes to boot) and, yes he’s back, LORD FRED HARRIS, to comprise a tremulous trio of technogurus. The original MAKING… was a half-hour BBC2 show presented from a black limbo and taking in computer news (“The Dragon Computer company is in financial trouble”), special features and the occasional interview. Fred road-tested speech synthesisers with the phrase “Power mowers are thoroughly tough, though.” Then, one Sunday morning, they decided to do an epic live show from Pebble Mill, wherein the rubbish BBC Buggy broke down on cue. More came under the title MICRO LIVE. MacNaught looked on aghast as a Prestel link was hacked into by an outside culprit while they watched. MICRO FILE was basically just a return to the original evening format, this time adding fresh-faced US college boy FREFF reporting from Carnegie-Mellon University. Macnaught enthused over transputers. Fred sung odes to the Amiga 1000, in particular DPaint I. Truly, another age.