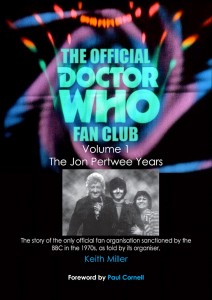 He was good enough to send us a copy, and we have to admit – with all due TVC-nonsense aside – it’s absolutely terrific. Granted, most of it looks like death (sorry, Keith) but it chronicles not only the birth of organised DW fandom, with all the attendant squabbles and nerdy turf wars, but also Keith’s own (and we can’t believe we’re going to say this without some sort of waspish caveat) coming of age. Impressive for a book which essentially has no narrative beyond picture captions.

Erm, that makes it sound like The Tardis Inside Out, and it’s really not.

So, what is it? In the main, it’s a reproduction of letters sent to Keith from Barry Letts’ secretary Sarah Newman, plus reproductions of every issue of the DWFC newsletter during the period.

It begins in 1972, when our hero (and he really is) is 13-years-old. For reasons that remain unclear, he becomes the secretary and de facto chairperson of The Official Doctor Who Fan Club – as endorsed by BBCtv. Can’t see Edward Russell sanctioning that today, eh readers? Edinburgh-based Keith then struggles to turn out monthly issues of his home-made mag, aided along the way by Sarah sending him stencils and synopses, and agreeing to cover postage costs via a laborious set-up wherein he drops off all copies of his latest effort to an office in BBC Scotland.

Because of the nature of their correspondence, we never see Keith’s letters, but it’s fun reading Sarah’s replies and filling in the gaps in the unfolding story. As time passes, the two build up quite a touching relationship; Sarah gently offers counsel when Keith’s father passes away and shares her frustrations at the rise of the Super Fan as Peter Capaldi – that Peter Capaldi – and pals proceed to make themselves pests to the Doctor Who production team, and commence on a grubby quest for Whovian power. There’s even a terrific bit where Keith frets that Sarah’s serious when she suggests he pops over to Glasgow to duff up the proto Malcolm Tucker.

Other highlights include Keith’s visits to London to see episodes of the show being filmed (first in the company of his mum, who takes a shine to Barry) and his various run-ins with Jon Pertwee who, when not cadging fags, is making his displeasure known at the amount of Hartnell and Troughton-related material in the nascent mag. Plus, Keith’s retelling of early Doctor Who stories. Who knew episode two of An Unearthly Child began with Ian fretting about what his landlady would say if he didn’t report back to his digs tout de suite?

This volume ends with the Third Doctor’s demise, and Keith being published in that year’s Doctor Who Annual from World Distributors.

With Keith’s permission, we’ve reproduced one of Sarah’s letters below (actually, it’s to Peter Capaldi), plus a particularly fine DWFC newsletter front page. But, seriously you should just get this book. A second volume covering the DWFC’s tussles with Tom Baker is promised. We hope to see it very, very soon. And, as someone once said: “Where there’s life…”

Find out more at Keith’s website: www.odwfc.com
(Or if that link doesn’t work, try this one) 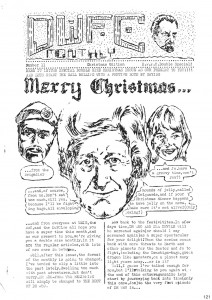 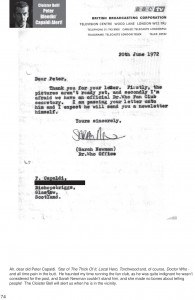