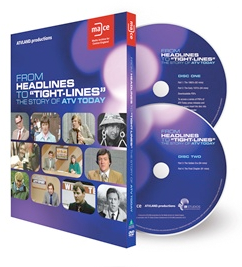 Here is the news!

Our good friends at The Media Archive for Central England, who previously brought us the sublime DVD release From ‘ATV Land’ in Colour have now released a new four-part/two disc documentary, tracing the history of Britain’s first regional TV news programme – which was called lots of things, but mainly ATV Today.

Called From Headlines to “Tight-Lines”, it begins, naturally, in 1964 and takes us all the way through to the 1980s. Highlights include: Reg Harcourt, who took an ATV camera team to film Enoch Powell’s Rivers of Blood Speech; Wolverhampton locals John Swallow and Sue Jay who reported  on the people and places of the communities they were passionate about; Anne Diamond and Nick Owen!; Derek Hobson, who went on to be the host of New Faces; Chris Tarrant, who started his  career as the ‘wacky’ one on the news; plus sporting legend Terry Thomas (twas he who coined the phrase, “tight-lines”); and Bob Warman, who is still the face of the Midlands on ITV today.

The release RRPs at £19.99, and is available here. But TV Cream readers can enjoy a special 20 percent discount on that price (plus any other DVD title they stock, including From ATVLand in Colour and any of their Midlands on Film collection) by entering the following discount code when prompted…