9pm THE QUATERMASS EXPERIMENT, BBC4
Unshackling from the usual TV Cream remit, we find ourselves at a more recent epistopic interface, but one – nevertheless – that is now 13 years old.  And a salient reminder of many things: live telly drama could be quite boring, old telly drama could be quite boring, Nigel Kneale was never boring. And there’s a Knealian paradox for you, right there.  Of course, this live recreation of the old 1950s’ series attracted special attention, due to the inclusion of the soon-to-be Doctor Who, David Tennant. Still we enjoyed the abundance of lab coats, if not a lot else. And of course, this was a repeat of the 2nd April showing.

10.30pm TIME SHIFT: LIVE ON THE NIGHT, BBC4
Following straight after, came this redoubtable piece from a strand that we’re not sure is still going.  This was back in the day, when archive telly could still be quite enjoyable, and the Time Shift mob from Bristol always did a first-rate job of clip-compilage, wheedling out some of the lesser seen nuggets from the archive. 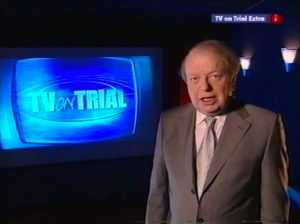 11.20pm TV ON TRIAL – 1970s, BBC4
What the hell, let’s stick with BBC 4 for our final entry.  And here was a programme to round off an evening of TV nostalgia.  Sarfraz Manzoor and Alan Coren were the two talents picked to pretend that there is any meaningful debate to be had around a large body of television, due to nothing more than the decade of its transmission, while John Sergeant tried to show an interest as presiding host.  For a while, he was on everything wasn’t he?