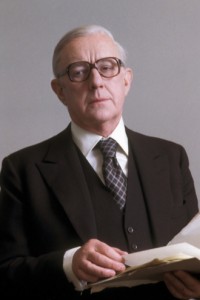 ALEC GUINNESS unearths a mole in the British Secret Service very very slowly, mostly by talking abstractedly about lamplighters and ju-ju men, while MICHAEL JAYSTON steals dodgy dossiers, GEORGE SEWELL watches the door, ANTHONY BATE worries about “the minister”, BERYL REID gets pissed, SIAN PHILLIPS has a lie-in until the very last scene and Seymour off of LAST OF THE SUMMER WINE repeatedly lights a pipe. BERNARD HEPTON, TERENCE RIGBY and IAN RICHARDSON sweated. IAN BANNEN got chased through the Czechoslovakian woods by dogs. Oh, and Control (ALEXANDER KNOX) goes mental. A masterpiece.