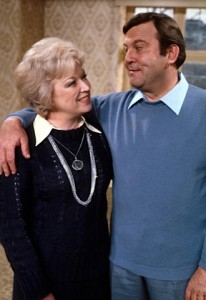 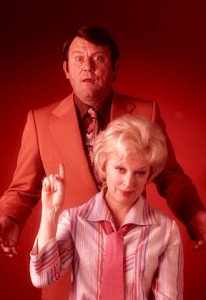 STURDY EIGHT o’clock suburbacom, with the rock solid SCOTT-WHITFIELD conglomerate in a sequel of sorts to HAPPY EVER AFTER with the Fletchers becoming the Medfords, upping sticks to Purley and moving in next to uppity neighbours Tarquin, Malcolm and Beattie, with blustery boss Sir Dennis Hodge (REGINALD MARSH, of course) completing the set. Too many memorable moments to mention, but we’ll do it anyway: the one where they had a barbecue – Terry’s food was awful, and the closing shot was three beefburgers going round on a record player, for some reason; the one where they go to France, and get assailed on the ferry by a kid acting badly, because he’d written in to JIM’LL FIX IT to be in Terry & June; the one where June became a punk (in 1985) – loads of Frankie Goes To Cricklewood “jokes”; the one where Terry has to buy a satellite dish so that a Middle East client he was entertaining could watch his favourite TV show (which turned out to be…Dallas); the one involving giant It’s A Knockout costumes – inevitably Terry got trapped in a giant rabbit’s outfit. Oh, and the one in which Terry fell in a river/lake/canal/giant pond, which was the one on every week.

Related Items:1978, BBC1, Casseroles overcooking on the stove, June Whitfield, Lawnmowers refusing to work and spitting out grass instead of sucking it up, New-fangled household appliances failing to work then suddenly righting themselves seconds before the end credits, Reginald Marsh, Terry Scott, Things being lost down the backs of sofas, Washing machines flooding the kitchen floor
Share
Tweet
Share
Share
Email