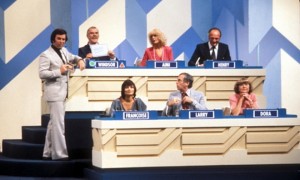 “ON THE PANEL, six of the finest showbusiness minds in the country. Sadly that was last week, so here are half a dozen no-hopers instead.” Hooray! Best-ever celebrity quiz in the history of telly, thanks to titanic quantities of self-deprecation launched by hosts El Tel and Sez Les. Piss-easy rules: two contestants (triangular or square) required to fill in the blanks in such humorous statements as “Lord Terence of Wogan had a spot of bother at the local garden party – he mistook one of the ornamental fountains for a blank”, but in such a way as to agree with the answers of a panel of six personalities. These were sat in a two-tier arrangement on the other side of the studio according to a famously strict pattern – top row: Middle-aged male character actor/humourist (eg ROY HUDD, GEORGE COLE); middle-aged female character actress/celeb (BERYL REID, CLAIRE RAYNER); blandish 30/40something male celeb (GARETH HUNT, GARY DAVIES); bottom row: bit of fluff for host to eye up (LORRAINE CHASE, LINDA LUSARDI); wacky comedian (almost always KENNY EVERETT); and dizzy actress/singer (SANDRA DICKINSON, CHERYL BAKER). All wrote their answer in 30-second longeur on tatty piece of card, before holding up “Ready” stick (later illuminated light) when finished. Finale supermatch game (“Supermatch game, supermatch game!”) had a board with various possible answers to something like “FISHING BLANK” worth 50 blanks (equivalent prize – matching luggage), 100 blanks (drinks trolley) and 150 blanks (self-assembly greenhouse). “Eugene, please reveal the legend!” Again, they picked celebs to suggest answers for them “or you can go for one of your own!” (they never did, poor fools). Everyone went away with a Blankety Blank cheque book and pen in, ahem, solid silver. The Wogan years: stick microphone (which Kenny invariably bent into amusing shape), “I don’t know what’s going on here” spiel, bemused disgust at BBC penny-pinching. The Dawson years: stamping on floor, elephant man gags, “Goodnight to our viewer in Cheltenham”, “prizes beyond avarice itself”, comical fury at BBC canteen. Rotten late-90s revival under auspices of Wirral transvestite LILY SAVAGE.