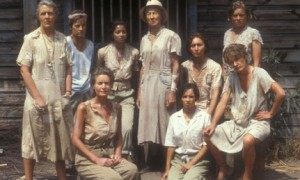 DIRTY-FACED FEISTY POWS of the fairer sex see out the Second World War in an internment camp in Malaya. The key word there being ‘camp’. Banding together under the de facto leadership of ANN BELL were rape victim STEPHANIE BEACHAM, doctor STEPHANIE COLE, nurses CLAIRE OBERMAN and JEANANNE CROWLEY and tottering old academic JEAN ANDERSON. Legendary BURT KWOUK was a camp commandant, the key word there being… oh, you get the idea. Stirring stuff and, once Michael Grade had sniffed out some post-SONGS OF PRAISE potential, a weekend hit. Last series offered up a multitude of baked bean endings by virtue of concentrating on that old dramatic stalwart, Life After Wartime, i.e. reunions with lost loves, arguments with other people’s lost loves, fights over lost loves, and lost loves staying positively lost through the small matter of, well, death. Lousy “reunion” finale in 1985 was set in 1950 and took the form of – erk – a murder mystery. At least nobody saw it coming. Unlike the end of the war.