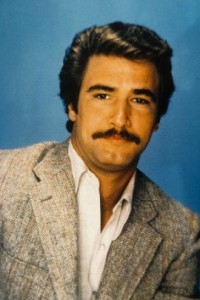 LIKE CAIN AND ABLE, Aaron Spelling and Glen Larson engaged in a battle royal throughout the 80s as to who could rustle up the biggest slabs of preposterous prime time palaver. Here’s Aaron fighting back after a nearby alphabetical resurgence from Glen (see [cref 2941 MANIMAL] and [cref 2879 MASQUERADE]), courtesy of the poor man’s TOM SELLECK, LEE HORSLEY, a wealthy idler who rounds up criminals in his spare time, aided if not abetted by PAMELA “PRINCESS ARDALA” HENSLEY, a smart computer called Baby, requisite Italian American loudmouth Vince Novelli (JOHN APREA) and his uncle Roy. Having his own helicopter inevitably meant one-in-the-eye for dopey old footsolidering felons, every bloody week.