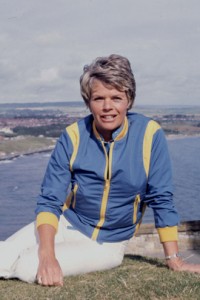 NOT REALLY. Basically a rip-off of [cref 2716 HOLIDAY] only with less about insurance rates and more tits’n’tinsel. Main gimmick from the off was having the presenter helm proceedings from a glittering foreign vista as opposed to hunkering down in a shabby studio, which sounded inspired but in reality meant JUDITH CHALMERS sashaying awkwardly along a dirty shoreline in Costa Plonka while ugly kids ran into shot and locals shouted obscenities. Benefited from the 1970s package holiday boom in that if all else failed there was always another resort to visit and bunch of red-faced ill-at-ease Brits to interview. CHRIS KELLY supplied early roving reports from Lake Windermere or, when there was enough in the kitty, Boulogne (“Incredibly, the hovercraft now takes just 45 minutes!”). Became a 7pm weeknight fixture. Chalmers-baiting orange-related gags entered the routines of the laziest comics in the land. Somehow soldiered on through the decades and never officially got axed, though it’s not been seen on screen for a fair while, and at some point Judith was jilted to make way for MARY NIGHTINGALE. Charming chirpy theme tune, a flute-furnished elevator music mini-masterpiece, bedecked the show during its imperial 1980s era.