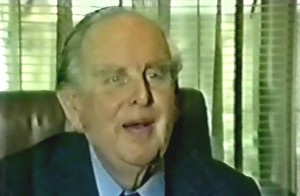 The brilliance of Troy Kennedy Martin’s TV drama is known to all, or at least it darn well should be. Most agree that Edge of Darkness sits at the top of his considerably well-stocked pantheon of hits, but great as it is, we’d like to raise a glass case of rare insects to this adaptation of Angus Wilson’s weird Cold War parable.

Stuart Wilson plays Simon Carter, the young, modernising Secretary of London Zoo, a creaky institution staffed by irascible, cranky old duffers, most of them one concrete ledge short of a penguin house. Trouble begins when a much-loved old zookeeper is kicked to death in the bollocks by Smokey the giraffe, setting in motion a train of bickering sessions between the Dad’s Army of ancient oddballs, before our old friend World War Three turns up, and the zoo – and Britain – erupt into a post-apocalyptic fascist dictatorship where, appropriately enough, the population find out what zoo life is like at first hand.

OK, so if you’re after subtle, nuanced character study, best to look elsewhere. This is one of those affairs, like Lindsay Anderson’s later films, where in amongst the chaos, Big Things about the State of the Nation are assumed to be said. (Fortunately, in this case, they actually are.) But the slowly building zany menace of Wilson’s book is perfectly updated by Kennedy Martin into that sort of vague, just-like-the-present-but-somehow-scarily-not future that works so much better than your Bakelite-encrusted fantastical visions of scientific progress.

And most importantly, the eponymous aging gents are played by a cast to die for: from Robert Urquhart and Maurice Denham as the reactionary and progressive warring department heads, through meek Andrew Cruickshank’s insect specialist and Marius Goring’s Teutonic psycho to the mighty Lord Godmanchester, played with superlative stately fruitiness by – who else? – Robert Morley, it’s a masterclass in top drawer carpet chewing.

Throw in a militant, bestial young animal liberationist, a rather nifty animated title sequence of the coloured pencil variety that you just don’t get nowadays, a ‘good old rare old Armageddon’ and a stuffed Yeti, and you quite simply can’t do better in the bonkers satirical allegory department.