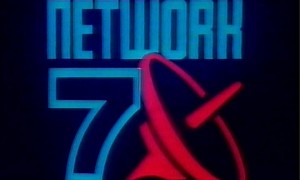 HYSTERICAL HARBINGER of that STREET-PORTER-led microphenomenon that was “yoof TV”. Programme was thought up on the hoof by Janet and Jane Hewland on the way to Channel 4. It showed. Each “episode” hailed from a shitty Docklands warehouse, wherein dwelt walking and occasionally-talking beings looking like front covers of The Face whose job was to introduce factunaimnent. Because entertainment = news and news = entertainment, don’t you know. Head boy was MURRAY BOLAND, head girl was dead-looking atrophied-eyed know-nothing deb MAGENTA DEVINE. Others, such as SANKHA GUHA, JASWINDER BANCIL and SEBASTIAN SCOTT, wore giant suits and dwelt in caravans. No beards, white coats or green allowed. Swoopy cameras piled around the premises, while endless pointless captions (“Temperature in studio – 32°”) flashed pointlessly. Reports covered yoof crime, yoof racism, yoof bands, yoof drugs and, most famously, yoof cash machine diddling. Whole thing went out – implausibly – on Sunday lunchtimes, ensuring maximum outrage and minimum viewers. But it ushered into living rooms a genuine new TV “genre”, albeit one that dated before it was even aired, and hence from here onwards flowed CLUB X, THE WORD and DEF II.