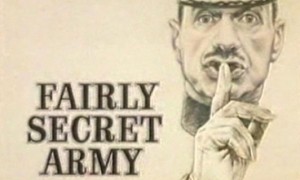 GEOFFREY PALMER more or less exported Jimmy off of FALL AND RISE OF REGINALD PERRIN into Harry Truscott for this decent enough saga of incompetent right-wing rabblerousing militia full of more undesirables (in Hazza’s eyes) than there are to fight in the “real” world. Terribly hush hush, don’t you know. JEREMY SINDEN, LIZ FRASER and RAY WINSTONE among the “wet leftie feminist loonies”.