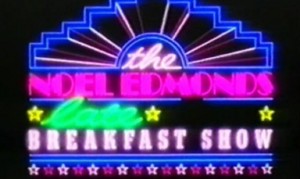 BOMBASTIC TEATIME behemoth which sprawled across half a decade before the BBC decided to “cancel this and all future editions of the programme. Tonight, instead of The Late Late Breakfast Show and Every Second Counts, we’re now showing the feature film One Of Our Dinosaurs Is Missing”. Noel would helm proceedings from a variety of none-more-80s pastel sofas, introducing, variously: MIKE SMITH on location at the sight of some “amazing stunt, never before attempted on British television”, usually involving stock-car racing, fighting the world’s tallest fire, or stock-car racing in the middle of the world’s tallest fire; The Hit Squad, secret camera stuntery wherein a man’s office gets rearranged while his back is turned; The Golden Egg Awards, basically a round-up of all the week’s “bloopers” including, one week, the time Phillip Schofield took the whole of the network off the air (Phil, gamely, showed up to collect the award in, of course, jacket and jeans); big guests like The Bee Gees, Duran Duran (who pretended to be commissionaires, so that all the audience members had their tickets signed by the band, only then had to give them in) and Phil Collins; viewers’ letters of the standard of “what’s that brown cakey slab that seems to float in the sky on Stevie Wonder’s ‘I Just Called To Say I Love You’ video, is it a piece of toast?”; the never-ending search for Mr Puniverse; and of course Give It A Whirl, wherein one poor sod on the other end of a phone would be encouraged to try some zany physical stunt selected by the Whirly Wheel. Usually involving something “never before attempted on British television” – or again, after Michael Lush. JOHN PEEL was involved during the early days, before falling out with Noel after – yup – a stock-car racing stunt went wrong. Show boasted textbook Edmonds titles: Noel is woken from his slumbers by a Noel-shaped alarm clock, “flies” across breakfast table covered in Noel-faced objects, then arrives in studio via convoluted journey in Noel-branded ultra-fast ultra-shiny transportation including helicopter, sports car, speedboat and assorted “television firsts”.