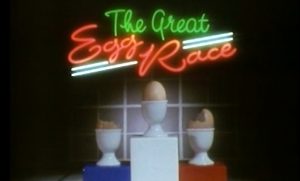 IT COULD never happen today. What started as a regional opt-out for Midlanders in late ’78 (original host JOCK SMITH of Radio Derby “fame”) ultimately became enduring BBC2 early evening staple under the benevolent rule of the great Professor HEINZ WOLFF, ordering three colour-coded teams of three cardigan-wearing types representing appropriate organizations like Wipac, ICI, Pilkington Glass etc. to “solve a fiendish engineering problem” using an esoteric array of materials (always including a bike pump and a hot water bottle – “the Englishman’s best friend” quipped Heinz). First series involved repeatedly trying to construct a means to propel an egg over a certain distance without breaking in a vehicle powered by a standard rubber band (hence programme title). Later shows devised other tests, such as building a windpump or a “prehensile tail”. Boring section where the teams got down to business was when you went to the loo/got another can of pop. When everyone came to demonstrate their devices, one team was guaranteed to cock the whole thing up completely. A beard-but-no-moustache “guest expert” (with an improbable name, like Fabian Acker) would then mark them on their engineering accomplishments, and good old Heinz chucked in a few extra points for “entertainment value”. A bizarre diversion in the grounds of BBC Pebble Mill saw LESLEY JUDD, no less, introduce the ‘Incredible Egg Machine’, which delivered Heinz his breakfast ostrich egg (they always tried to mention the word “breakfast” as much as possible) via a Heath Robinson-out-of-Mousetrap! series of comical mechanisms. Whole stunning affair capped by smashing theme tune reminiscent of Hot Butter.