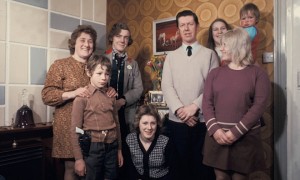 DOCU-SOAP BEFORE they’d been invented, and indeed, the best one ever made. Lives of the Wilkins family of Reading laid bare for all to see. The mother was an old bag armed with a rolling pin and a nice line in vicious put-downs. Her attempts to subjugate the rest of the family were usually met with a combination of apathy and stubborn resistance and her husband would arrive home from driving buses to find everyone fighting and his tea in the dog. The kids (neither of which were his) comprised a surly blonde daughter who was engaged to a “wholly unsuitable” local lad with bad habits and a Zapata moustache and a monkey-faced pre-pubescent son who deserved sympathy rather than blame. Despite being representative sample of millions of households around the country, the Great British Public rose up in droves to protest before rushing to their newsagents to buy copies of the papers the day after the son got married. The missus turned up on WOGAN in the mid-80s to reveal everyone had since split up. Obviously the media, not the state of Ma Wilkins’ cooker, was to blame.