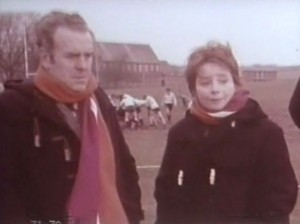 A strange entry in the Play for Today canon from John Osborne, the ‘father of kitchen sink drama’, following the efforts of self-made George Cole and his wife to choose a public school – not, as it transpires, for a child of theirs, but for themselves. So, drafted into different houses, Newbold, JA and his wife, Mellor, PL (accepted unquestioningly as fellow pupils by the rest of the school) get stuck into the ritual of cold showers, chapel, rugger and maths, she with far more evident relish and contentment than he. Eventually, at the end of the term, Newbold, JA decides he can’t hack it, and they leave ignominiously in their chauffeur-driven car, ignored by the rest of the school.

A troubled production for two reasons – the script required much location filming in a public school, but the Headmasters’ Guild, post-If…, were decidedly lukewarm about offering their premises for the filming of possibly subversive material, and Osborne got into one of his famous strops with the production team over their treatment of the work, only to recant after the finished play was widely well-received. The Guild needn’t have worried really, as it’s a more subtle and (at least quasi-) affectionate examination of the public school system than Lindsay Anderson’s sledgehammer effort, depicting headmaster and head boys not so much as sadistic monsters, rather forthright, ultra-confident but permanently distracted eccentrics. The head welcomes Newbold and wife to the school in the same stuttering, rambling manner he conducts the chapel service, while the 17-year-old head of Newbold’s house is given to tortuous, meandering and increasingly bizarre stream-of-consciousness speeches about the school (“You’re neither in a doss-house for scruffy-minded New Statesman wet eggs or the offspring of fecund women graduates breast-fed from Aldermaston to Grosvenor bloody Square.”) and, in a very odd way, society in general (“Planet speaks not to planet, earth not to earth, nation not to nation and man – not – not, we say, to man. If you don’t see it, doubtless you never shall and if you do, it will finally astonish me.”)

The location work is fine, and Cole is, of course, perfect in the role of bumbling lower-middle-class husband almost completely crushed by social and hierarchical superiors nearly twenty years his junior (“You are not expected to reply or express an opinion. You have none nor probably ever will do.”) The story meanders along in the same disjointed way as the protagonists talk, and doesn’t so much end as peter out, the humbled lower-middles realising their class-hopping experiment has failed. A great, weird, funny gem from Osborne, far removed from the ‘kitchen sink’ cliche he (inadvertently) helped to found in the 1950s, and from which Play for Today was, with productions such as this, decisively breaking away.