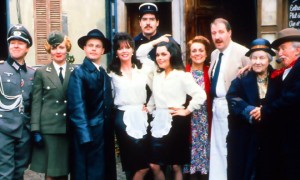 THAT EXCLAMATION mark says it all. More perspicacious production line period palaver from the pens of David Croft – who with Jimmy Perry wrote the vastly overrated [cref 715 DAD’S ARMY] and the endless [cref 2607 HI-DE-HI!] – and Jeremy Lloyd which never seemed to be off the telly and lasted longer than the war it was “gently lampooning”. Entire premise ripped off from [cref 3648 SECRET ARMY]. Rene (GORDEN KAYE), a moon-faced smart-alec cafe owner who spoke like someone doing a shit impression of Inspector Clouseau, reluctantly agrees to help the French resistance during WW2. Married to a prickly wife Edith who can’t sing (“Youuuuuu stupid woman!”) but also fancies the arse off barmaid Yvette, but who keeps being distracted by Michelle the “collaborator” (“Listen very carefully, I shall say zees only once”), who keeps trying to avoid the machinations of Gestapo goon with a limp Herr Flick, and Helga the blonde Nazi officer who took to appearing in only her underwear, and the gay Nazi officer, the stupid Nazi officer, British airmen in terribly unamusing inability to escape to “Blighty” and uproarious false accents (“I was just pissing by”), “Mother” upstairs called Fanny with comic ear trumpet, the French policeman next door… Oh, dear god. Entire seasons seemed to revolve around Rene being presumed dead and being replaced with his identical brother (GORDEN KAYE, unsurprisingly), or the location of the Fallen Madonna With The Big Boobies, or comically-shaped bratwurst. Each episode opened with Gorden looking stupid (standing in a bale of hay, or appearing dressed as a woman, or appearing dressed as a woman in a bale of hay) and asking us what we thought he was doing. How the hell did we know ? RONNIE HAZELHURST arranged the theme, which didn’t really fit in on account of it being really rather good.