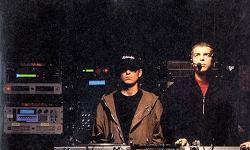 WRY Imperial Phase pop-duo invited to do a novelty holiday cover slot as part of the baffling ‘Bates’ Mates’ summer scheme (see also Jason Donovan, Donna Summer and other equally pointless choices) who became a surprise hit after bombarding the audience with toytown techno, sniggering at threatening letters demanding “something from the hit parade like Elvis Presley”, and generally revelling in the chance to relay their dry wit for the masses. First choice as cover for dance shows and John Peel for several years thereafter.