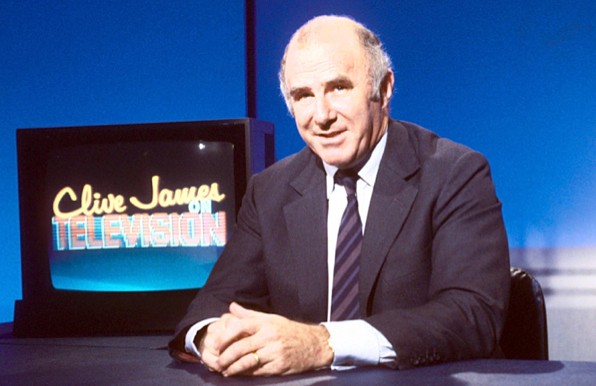 The fifth volume of Clive James’s memoirs will be published later this year.

It will be called The Blaze of Obscurity, and as far as TV Cream is concerned, it will be unequivocally A Good Thing.

All of James’s memoirs are fine reads, but this forthcoming instalment, covering as it does the man’s stints at LWT and the BBC during the 1980s and early 90s, tackles Clive’s embrace of an unlikely ubiquity.

From being all over telly as a critic, our hero moves with the effort of a flick of a channel switch to being simply all over the telly. James’s imperial years ensue, as first he circles the globe’s spluttering network of cable channels and satellite stations, and then just circles the globe.

In both cases he strolls casually between high- and low-brow domains, in the process baiting all his detractors who can’t understand how someone can feel at ease jousting about Sartre late on a weeknight then japing about Japanese game shows in primetime at the weekend.

Everything Clive James does, in print, on telly, on the radio and online, has always been worth taking notice of*. Superficially there may not be much to connect swimming with Hugh Hefner’s Playmates or jiving to Marguerita Pracatan and deconstructing Barthes within a semi-circle of pseuds in a darkened studio, but that kind of misses the point. Our man enjoys them all. Superficially, seriously, it doesn’t matter. They all mean something to him, and he revels in it.

Clive became an adopted uncle of the nation during the era covered in his next volume of memoirs, by doing what all the best uncles do: taking the piss cleverly.

Before we knew of this book’s imminent arrival, TV Cream had been dipping into one of James’s collections of assorted non-telly scribblings, coincidentally also hailing from the 1980s.

Despite all the predictable of-their-time popular cultural touchstones – Barry Manilow, Torvill and Dean, Michael Foot, the Reagans, Nigel Mansell – this book, Snakecharmers in Texas: Essays 1980-1987, is fresh and funny and reads just like the man sounds, or used to sound when he was on the telly.

It’s worth shelling out for if you ever see it second hand, not least for Clive’s heroic attempt to circumnavigate the planet in just three days.

Now you’ve have to excuse us, we’ve just received word that an extremely eminent and attractive female foreign dignitary is in town and desperate to meet us.

*Well, except for those dodgy prose-poems.