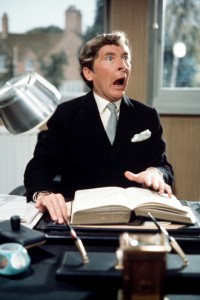 When it comes to the penmanship of the crystal bucket’s finest, you’d surely have to take diaries over memoirs any day.

The diary is the product of someone who has purposefully set about documenting their life from day one, regardless of whether it ever ends up in print. An autobiography is merely the effort of someone needing a bit of money *now*.

Both are written accordingly.

The memoir arranges the past selectively on the author’s terms, and invariably omits all the routine clutter that the reader actually wants to know about. The diary, to ever increasing returns, does the opposite.

Which makes it even more of a shame there are so few of them about. You’ve got Kenneth Williams‘s diaries, naturally, which still sit resplendently, or rather crouch simperingly, on a Great Portland Street-sized plateau far above the efforts of his peers.

It’s one of those books that ought to form the entrance exam to the TV Cream forum. In fact, from now on you’ll only get your Cream green card if you can identify the persons Kenny is describing here:

a) North country nit
b) He has never been rude to me before. I thought he liked me.
c) A sight at once sacrilegious and scandalous
d) He said ‘Thanks for being in it and for all the laughs’ and he makes everything worthwhile
e) Must say, they’re a smashing team on that show
f) In life he looks like a shambling derelict but on screen he comes over attractive and benign

Mounting a firm but thoroughly good-natured challenge, however, is Michael Palin. The best news of the past week was the confirmation that the next volume of his diaries is coming out in the autumn, meaning there’s a second book to add to your Christmas list.

Just how good Mike’s first collection was can be measured by how many times you find yourself going back to it to revisit a particularly striking anecdote or encounter. In TV Cream’s case, that’s usually several times a week.

The star-encrusted drudgery of a BBC Christmas party, the gathering of friends and family round the telly to judge the author’s latest small screen endeavour, the endless meetings in rooms at Television Centre…it’s irresistible. Why can’t there be more books like this? In fact, where are the other books like this?

Alan Bennett‘s diaries, were they not written in such a self-consciously ‘ooh eck, this is probably going to be published in a few years time’ style, might count for inclusion in the first eleven.

Former Beeb suit Will Wyatt turned his diaries into an ace account of life in the concrete doughnut, but there’s that nagging suspicion they’d have been even better if they’d been published in their original form.

Extracts from Eric Morecambe‘s journals and scrapbook have been selectively published; likewise Les Dawson. And, of course, Alison Graham‘s diaries have been serialised exclusively on TV Cream.

If only Frank Bough, or Michael Barratt, or Aspel, or Esther had kept diaries. Imagine if Brucie had kept one – although, admittedly, there’s still time. A day by day account of doing the next series of Strictly Come Dancing? We’d buy it.

Who else? Any notable diarists we’ve overlooked?*