Today’s clue is in the form of an entry from the diary of Kenneth Williams – an entry, moreover, that has remained unpublished until now, and contains details of an unusually relevant offer of work that Kenny, not unusually, was only too happy to turn down: 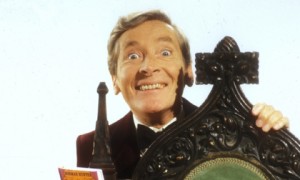 Dreared around the flat for a couple of hours. Moment’s panic when I thought I saw your actual spider in the bath, but turned out to be a button off me trousers. O the humiliation! Caught the tube to Television Centre for meeting with the head of Children’s Programmes, a chap in his early 40s who looked disapproving when I did the palare. Shame – he was a nice looking piece. Offered me the most unlikely engagement: the host of a children’s treasure hunt, to be transmitted every afternoon for four weeks in the new year, with me playing all of the parts! Turned him down straightaway. The thought of climbing in and out of costumes at my age – it just shouldn’t be done. Struck, as ever, by all the leeches that live off the British television industry – not that it is an industry, not anymore. But then – a stroke of luck – I bumped into the delightful Roy Castle, by the doors at the end of the first floor, just before the stairwell. I do like Roy. Explained the reason for my visit. “Who’d want to do a treasure hunt round here?” he exclaimed. “Quite,” I agreed. “They’re more used to burying stuff in this place, not digging things up!”