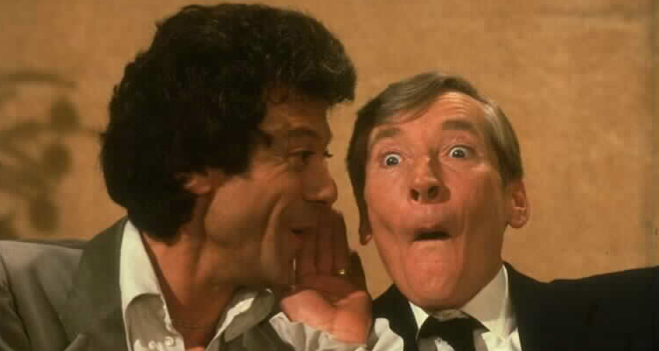 Seeing as how Daybreak is now officially A Flop, ITV bosses will soon be reaching around for other formats in which to park their channel’s most famous face.

For you can bet your life that one morning before the clocks go back we’ll hear the giveaway phrase “Adrian Chiles is away this week” tumble awkwardly from Christine Bleakley’s lips, followed by Christine herself taking a leave of absence, followed by Christine discovering she is to be indefinitely paired with Alan Titchmarsh or Lily Savage, and so on.

Adrian, then, faces a future quite probably as the frontman for some hastily revived format, which is triumphantly paraded in a peak primetime slot for precisely one week then flung out late at night or before teatime every Wednesday until Christmas.

Which then poses the more interesting question: who would be the guests, both regular and otherwise?

There aren’t many who’d be able to pull off Lionel Blair [pause for I’m Sorry I Haven’t A Clue-esque gales of laughter].

Michael Ball suggests himself, by virtue of being “theatrical” and of being an ITV face. As for his guests, assume the likes of  Barrowman, Richard Bacon and someone off Emmerdale or The X Factor.

Filling the role of Una Stubbs/Liza Goddard, we fear the call would go out to Claire Sweeney, “forces’ sweetheart” and another ITV spare part. Her team would be entirely comprised of Loose Women.

In fact, the show could even become a regular slot on Loose Women, helpfully keeping it out of sight of that population of the UK that has taste.

Alternatively, Give us a Clue could be revived properly, with Aspel back behind the desk (not Parky – no way), someone like Noel Edmonds captaining “the boys” and Caroline Quentin “helming” the girls. But that would never happen, at least not on ITV, because it smacks of good sense.