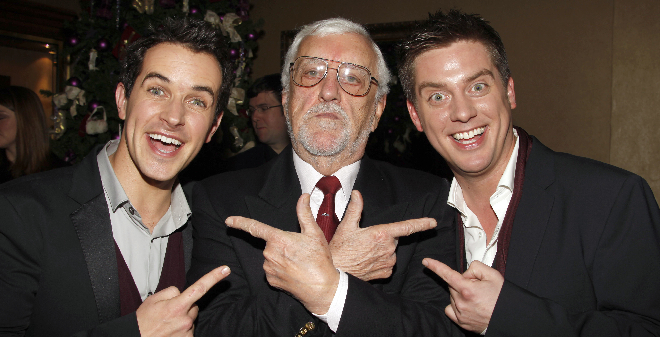 Dick and Dom are returning to Saturday morning telly next year.

The announcement was made during a Children’s BBC press event to promote the new series of The Sarah Jane Adventures*.

By the sound of it, the pair’s Bungalow-based antics (for that is what it will be) are to be confined to the CBBC channel. Messrs McCourt and Wood are also filming another of their frankly incomprehensible Legend series for BBC1.

Given that their Saturday morning comeback is slated for some point in 2011, we wonder if this might mean the twosome’s titular residence will be in Salford rather than W12.

This would, however, open up plenty of possibilities for non-Bungalow formats, such as Dick and Dom’s 8.15 from Manchester, Dick and Dom On The Waterfront and, to a much lesser extent, Dick and Dom’s Saturday Picture Show.

Anyway, look out for the Media Guardian welcoming this news with its usual attention to accuracy via a reference to “the pair’s iconic outdoor game, Bogey”.

*Which includes an episode featuring a cameo from Jo Grant, wherein the scatty companion brings a million continuity-aroused singletons to a simultaneous climax by mentioning the planet Karfel.