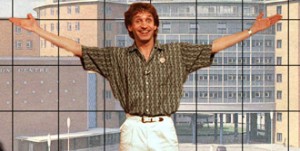 Time for another catch-up of the latest batch of Puzzle Trail clues – with a few extra hints thrown in for good measure.

Day 12 involved an encounter with Blue Peter and progressive rock. To come up with the correct grid reference to cross off the map, we had to take the first letter of the village that is the location of Simon Groom’s farm, and couple that with the number of albums (of original material) Mike Oldfield has released under the title Tubular Bells.

On day 13 we discovered the treasure wasn’t hidden in the square in which Roy Castle and a small girl exchanged pleasantries while doing a bit of toe-tapping, before joining what seemed at the time like a million other clog-sporting clientele to perform the world’s largest tap dance.

On day 14 we met Michael Aspel, who told us the treasure was not to be found in the square with the word TELEVISION in it.

Day 15 involved identifying the year in which an episode of Cheggers Plays Pop was broadcast, using the top 10 chart displayed in a photograph of Keith Chegwin. We then had to add up the individual digits of that year to get a two digit answer, and finally combine the first digit of our answer with the first letter of the item Cheggers used to present on The Big Breakfast, and we had our grid reference.

The clue for day 16 was somewhat more simpler: the grid reference was the second half of the name of the “youth” “strand” of themed programmes invented by Janet Street Porter for BBC2 in the late 80s and early 90s.

On day 17 we encountered a picture of one of Sir Clive Sinclair’s machines, whose model number was the same as the grid reference we had to cross off the map.

On day 18 we met Frank Muir who told us the treasure was not to be found in the square with the word CENTRE in it.

Day 19‘s clue was themed around All Creatures Great and Small. To get the grid reference we needed to take the first letter of the surname of Christopher Timothy’s character, and couple that with the number of different actresses who played his wife.

The grid reference for day 20 was the postcode for the London borough in which Des O’Connor was born.

On day 21 we learned the treasure was not to be found in the square that shares its name with the most ubiquitous size of paper in the whole world.

Lastly, to get the grid reference for day 22 we had to take the first letter of Cliff Richard’s real name and couple that with the number of points by which he lost the 1968 Eurovision Song Contest.

As regards those extra clues… well, if you’ve crossed off all of the correct 22 grid references, when you look at your map you should now have one of the four numerical rows entirely covered by crosses. You should also have three of the eight alphabetical columns also completely crossed off.

Plus there should be just one column that only has one cross in it.

You can find clues 1-11 here, together with your own downloadable Puzzle Trail map.

We’ll do a full rundown of all the clues just before the final “reveal”, as it were, in case people prefer to wait and complete the trail all in one go.

Look out for the next clue tomorrow, which will also feature more details about the prizes up for grabs.