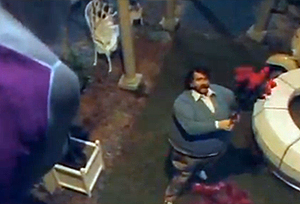 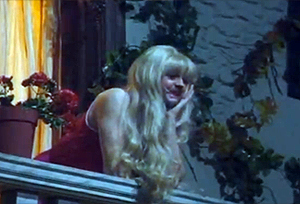 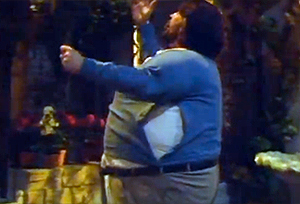 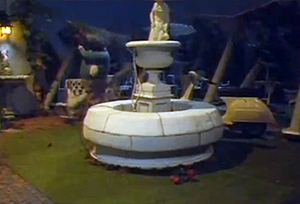 Has a studio audience ever laughed longer and louder than they do to this relentlessly silly sketch? When Kenny Everett appears on screen as Renato in a fat suit (and on some kind of moped, which doesn’t appear again and certainly isn’t in the original video it’s parodying), the audience shriek with delight, and when they see it’s Cuddly Ken in a silly wig as Renee then they have a mass breakdown and are utterly helpless with mirth. There’s very little to this sketch, such as it is, in that Ken simply waddles around smashing up the set while miming appallingly to the song, and on any other comedian’s show that would barely have sustained five seconds. But Ken wasn’t like other comedians and for a good ninety seconds the audience simply cannot stop laughing as more things are smashed up and Ken in a wig pulls even more stupid faces. The energy is absolutely rele ntless and its testament to Ken’s determination to cram in as many gags as possible and simply force the audience into submission. Never before too has a beard been used to such great comic effect with Ken in drag always being hilarious because he was so bad at it. Of course the audience’s hilarity is heightened by the fact that the song and video were so well known at the time, and the sketch was so topical, with Ken always having that knack of being the first to parody the latest pop culture, dressing up as the likes of Boy George and Toyah. Then to top it all off there’s a deconstruction of the whole thing as Ken walks on to introduce his stunt double. And finally the audience can calm down having generated more laughter at that one sketch than most BBC comedy shows at the time could muster in a whole series. By the way, that’s not our channel on YouTube.