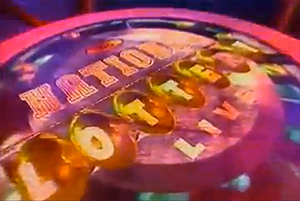 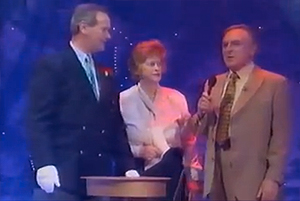 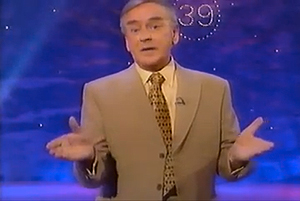 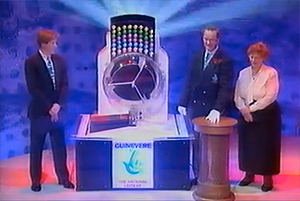 Look at all the rigmarole that surrounded the lottery in those days, even going as far as following John Willain to the Lyceum (with “3.47pm today” caption) to watch someone pick the machine. These days it’s all done and dusted within a minute and on Wednesdays they don’t even bother televising it. But back in 1996 it was still the national talking point, simulcast on Radio 1, heralded by some pyrotechnics and one of the most watched things on TV. That was why huge names queued up to appear, including as Bob points out here Elton John and Pavarotti, but as that performance was pre-recorded they weren’t around to start the draw and a bit of business involving an ostensibly unsuspecting punter was cooked up. Then, the horror of it all! The machine breaks down! So after Deadly (who sounds incredibly young here) pads out for a bit it’s back to Lord Bob Monkhouse to get things moving. And the brilliant thing is that it’s Bob in charge because heaven knows how it would have gone had Anthea Turner or someone like Lulu had been there. Bob, of course, had to marshal The Golden Shot for many years and when you’ve seen crossbows ricochet across a studio, the lottery machine breaking down is all grist to the mill, and after he brilliantly takes Deadly at his word, literally, he smooths things over and pledges to return later. After Casualty we’re back, and given Bob once managed to improvise an entirely new stand-up routine when the autocue went down, of course he’s come up with a few suitable and very amusing gags for the occasion, as well as quoting from Reeves and Mortimer, which doesn’t get the laugh it deserves. Eventually the draw takes place as planned, and it turned out that John Willain had forgotten to close the back of the machine, the silly sod. But the whole thing is fantastic fun and confirms again that Bob was that master of live television and was the only person to make the lottery draw worth watching even if you didn’t have a ticket. We shall never see the likes of him again.