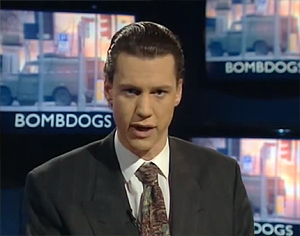 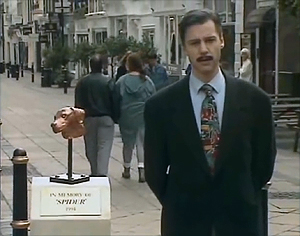 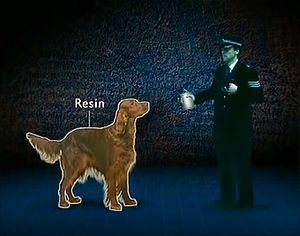 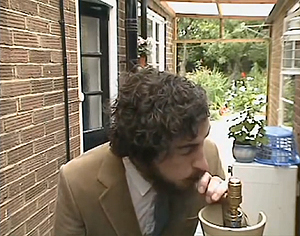 The highest placed scripted moment in our chart (if you want another clue as to what might be number one), The Day Today is as close to perfection as television comedy gets, a sublime blend of satire, parody and sheer unadulterated silliness, and all of these are illustrated in their sequence on the bombdogs campaign. As a parody of television news coverage in the early nineties it’s without equal, expertly combining library footage with newly shot material to create total accuracy alongside the absurdity. Eugen Fraxby’s mannered, strangulated delivery (and slightly odd name) is absolutely spot-on (compare and contrast with Anthony Dworkin on TV-am), meaning that even when he’s talking complete bollocks (“and told the public to clear off!”) it’s totally convincing. The graphics are also brilliant, wi th genuine ITN designers engaged to create something that wasn’t all that different to the daft ideas that were turning up in the proper news at the time. The bit everyone remembers is the interview with Sinn Fein’s Rory O’Connor, a hilarious performance from Steve Coogan, which is not just silly for the sake of it but expertly satirises the then-current IRA broadcasting ban and emphasises just how ridiculous that law was. And all this actually did change things, twenty years ago the news really was like this, presenters read the news as if carved on tablets of stone, reporters came across like automata and graphics did baffle and bore the audience, and however overblown it can get these days, at least it looks like human beings are involved. But even if the stuff it’s parodying is less common, it remains just as funny now thanks to it being absolutely stuffed full of gags, from Coogan’s overexcited eyewitness to the foul-mouthed MP, via the policeman’s helpf ul directions. And once all comedic potential has been extracted from the idea, it immediately comes to a close with an outrageous but totally hilarious punchline. We could have included all of The Day Today in this chart but this distils into four and a bit minutes everything that made it a masterpiece.