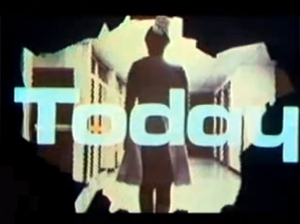 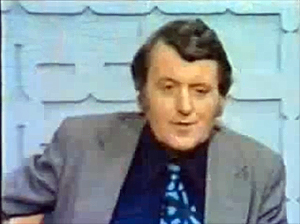 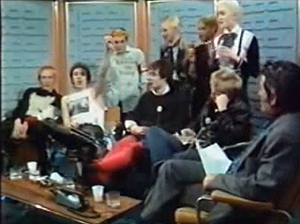 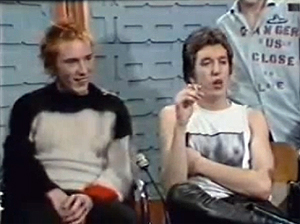 Well, we all know what this one is, though kudos to the person who’s put the video there together from various sources to create the most complete version of an interview so famous most people can probably now recite the obscenities along with Steve Jones. So, the known facts – they were a last minute booking as Freddie Mercury had to go to the dentist, and only agreed to it after Malcolm McClaren said he’d stop their wages if they didn’t go on, and as we all know it was only shown in London so most of the country were blissfully unaware of the world changing until the papers went nuts about it the next morning. You’d imagine viewers in the North West, at least, would have been able to take it in their stride given their teatime telly chum Tony Wilson had put them on screen three months earlier. Over the years, opinion seems to have changed to the extent that now most people blame Bill for being a stupid old bastard and bringing it all on himself, while the producer Mike Housego suggested on TV Hell that they couldn’t terminate the interview any earlier because it would have taken a while to get a standby film on and there could have been more trouble if they’d cut them off, and decided they could ride it out for another thirty seconds because, apparently, “they couldn’t do much else”, not realising Bill was going to ensure the last thirty seconds were by far the worst bit. Possibly the most shocking thing from a modern perspective is the one thing that was perfectly fine at the time, the fact they’re all smoking. Steve Jones’ use of the word “rotter” has continued to puzzle scholars to this day, as it was pretty much archaic in the seventies and adds a touch of even greater absurdity to the whole thing. As Mike Housego suggested, “I really couldn’t wait to hear our signature tune Windy” and the band’s prancin g about to it is the most hilarious thing, while Grundy clearly says “Oh, shit!” and realises the whole thing’s gone tits up. Apparently it’s the most requested archive clip in history, most viewers these days reacting to it like a fondly remembered comedy classic, up there with Del Boy falling through the bar.