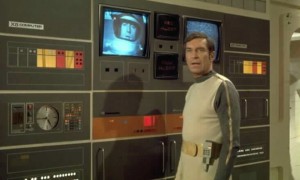 GERRY ANDERSON thinks he can better STAR TREK and decides to arrange a nuclear explosion on the “dark side of the moon” thereby sending the titular satellite, its research station MOONBASE ALPHA and all 311 inhabitants into deepest space. Ongoing “mission” was to try and, well, stop. Except various Bacofoil alien encounters kept getting in the way and pissing off MARTIN “KOENIG” LANDAU and BARBARA “DR RUSSELL” BAIN. Plots included finding Voyager II (like in that Star Trek film), a big piece of fluff in space, and the old “duplicate Moonbase” ploy. Crew boasted a woman who could turn herself into a pot plant. Those green and white Eagles (with ace detatchable T-Bird 2-style pods) were neat enough though, with the Dinky toy versions rising in price to about £500 at exactly the time we threw ours out.