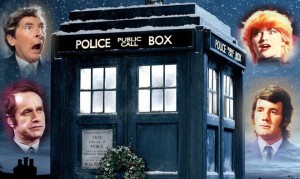 Just what is going on with the nation’s favourite Saturday night curtain-drawing, National Grid-spiking telly institution?

There’s talk of a “hiatus”, rumours of bad blood between the show’s head nabob and the BBC, uncertainty about when the thing will be back in production, and even the suggestion its stars want out.

But enough about So You Think You Can Dance (yes, you knew that was coming).

What of all this gossip about Dr Who?

To wit, the gossip we’re about to feed through our Dr Who Fact-Checker, an app newly-developed for the TV Cream Matrix Databank?

Let’s see whether there’s any truth behind the latest rumours doing the round(el)s.

Everybody take a deep breath – and that includes, in the words of Sue Cook, the “freaks”. Seeing as Dr Who is the BBC’s chief moneyspinner, it will surely only be dumped when it ceases to be profitable. And even those Tardis-shaped straight-from-the-oven edible pastries are, as far we know, still selling like hot cakes. Verdict: FALSE!

2) Dr Who is being moved to the autumn

We’re not sure why there’s so much fuss being made about this. It’s already happened. The next series – and yes, that is the right description – of Dr Who will air later this year, long past the vernal equinox. Verdict: TRUE!

3) Dr Who has fallen out of favour at the BBC

Perhaps the corporation certainly doesn’t look upon the show with as much reverence as it used to. But we happen to think that’s a good thing, as it means those running the show have to work harder to persuade the suits that Dr Who is still new, fun and exciting. Well, that’s our theory. Besides, some people have always hated Dr Who. The Meddling Monk for one. Verdict: INVALID QUESTION!

4) Amy and Rory are leaving Dr Who

It’s about time the Tardis’s own Terry and June moved on. Especially as it’d be rather nice for Mrs Rory (and for us) not to have to see her husband die another six times before Michelmas. Verdict: TRUE (HOPEFULLY)!

5) Steven Moffat is leaving Dr Who

We don’t think that Press Gang reunion episode has been commissioned yet, so there’s still nothing for Moffat that’s truly worth leaving Dr Who for. Besides, he’s already shown that, unlike his predecessor, it’s possible to look after Dr Who while simultaneously shepherding another non-Who hit series on to our screens. And yes, we certainly wouldn’t mind a Sherlock Christmas special rather than a Dr Who one this year. Verdict: FALSE!

6) The Doctor who gets shot by the astronaut is the doppelganger from that creepy monastery who the real Doctor decides to kill off because of all the enemies he is creating around the galaxy and the person in the astronaut suit is a young River Song which is why the old River Song’s bullets do not have any effect and is why River Song is in prison to maintain the pretence that the Doctor is dead.

This is correct, and not because the Doctor is “part of all of us” or “part of the fabric of time” or some such bollocks. No, according to something we were watching the other day, not only is Dr Who real, but his name is actually Dr Who and he is an Earth-born scientist and inventor*. Verdict: TRUE!

8) Dr Who is the name of the character

This isn’t even up for debate. Even TV Times agrees with this one. Verdict: TRUE!

How many times?! Like that portaloo in The Bluetones’ video for Solomon Bites The Worm, Dr Who’s spaceship exists in two places at the same time. To be tediously technical, the interior is in one dimension while the exterior mooches about inside another dimension. It is not a big box inside a little one, which means, among other things, Matthew Waterhouse was wrong in titling his autobiography Blue Box Boy. Verdict: FALSE!

10) 1980s ‘protest’ single Doctor In Distress is being re-recorded by, among others, Kate Thornton and Lizo Mzimba

We’re investigating this tantalising prospect. Look out for more news later this week. Verdict: LET’S ALL ANSWER HIS S.O.S!

*Come come, you should all (not just the freaks) know to what we are referring.