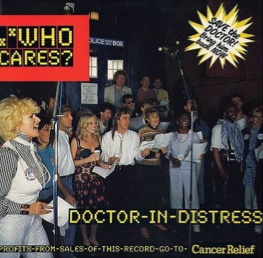 It seems those rumours we reportedly recently about a Dr Who protest record were true.

We can now confirm that an updated version of the immensely unsuccessful 1985 7″ single Doctor in Distress is ready for release.

This new remix reunites many of the original performers, along with new guests including Kate Thornton, Lizo Mzimba and, perhaps surprisingly, Christopher Eccleston.

The song has been produced, as far as we can gather, without the participation of anyone currently involved with the show itself.

It is believed this is because they were all busy filming the next episode of Dr Who.

Anyway, thanks to an industry insider, we have got our hands on an advance copy of the single.

You can listen to ‘Doctor in Distress 2011’ right now, either by downloading it from here on TV Cream, or simply pressing the play button below.