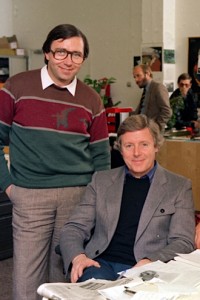 ASPEL-HELMED LONDON-ONLY weekend-starting magazine, notable for launching television careers of JANET STREET-PORTER and DANNY BAKER, while MASTERMIND’s FRED HOUSEGO, CHRIS TARRANT and, on the way home from County Hall, KEN LIVINGSTONE were also on board. GREG DYKE was the brains behind it all. Became the most watched regional programme in Britain – unsurprising, really, with items like Janet jousting with pigeon fanciers or trying to raise a replica matchstick Titantic from a pond, or a live OB on Southend beach where the tide came in early and wrecked everything, or an item invaded by a bunch of kids, one of whom was promptly picked up by the reporter and thrown across the street. Most memorable moment of all was furious contretemps at a railway station twixt an officious British Rail employee and a swarthy Baker who was attempting to elicit voxpops from the capital’s plebs. Official: “Come on Danny, you know you can’t film here.” Baker: “How dare you! Don’t you dare speak to me like that!”