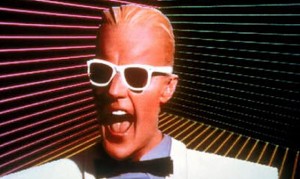 JEREMY ISAACS’S favourite ever Channel 4 programme: fact! And you thought the old bugalugs didn’t have a sense of humour (well, he was responsible for THE CUT PRICE COMEDY SHOW). Original was actually REBUS – THE MAX HEADROOM STORY, set in Blade Runny futuroscape, with multiple TV channels (mostly owned by Maxwellian fat bloke) fucking up the population (especially famous “blipvert” exploding bloke scene). Ace mobile reporter (MATT FREWER) is doing an undercover nose on this stuff, gets caught, chased, dies in a bike smash, but is re-animated by the TV blokies as virtual groove-headed, shadewearing Max Headroom (after sign he saw just before the crash), who then links their TV shows in stuttery, knackered Transatlantic style. Actual titular show was proto-MTV clip-linking stuff, with much bouncy lines in background and references to 80s cultural jetsam. Arch status sealed in collaboration with The Art Of Noise.