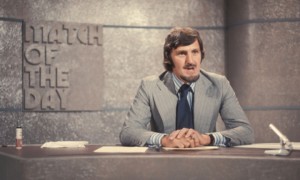 ONCE A Saturday night-only appointment, now a franchise seemingly wheeled out at any time of the day (it’s World Cup Grandstand, dammit!). You know the drill:

3) “Coming up”, all the action from “the games that matter”, i.e. be thankful for what you’ve got

6) Delirious shouting from the likes of JOHN MOTSON, DAVID COLEMAN or BARRY DAVIES
7) Earnest analysis of “spot of bother” at this or that ground, inevitably ending with someone concluding “the authorities really need to crack down on this sort of thing”
8) Pithy sign-off from your host, either mastered by the majestic Lynam or muffed by the mithering Lineker.