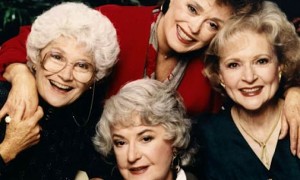 ON THE FACE of it, this early door Channel Four evening stalwart seemed nothing more than a half-hour retirement home for assorted American comediennes of a certain (or, in at least one case, uncertain) age. To wit: BEA ARTHUR and RUE MCCLANAHAN off of MAUDE, one of those ratings-busting US sitcoms that never registered on this side of the pond; one-time model turned Lucille Ball-style telly magnate BETTY WHITE, and genuine old-school borscht belt ‘try the liver’ wiseacre ESTELLE GETTY as, respectively, the put-upon, mannish divorcée, the mutton/lamb wardrobed trouser-chaser, the dozy Scandinavian and the embittered mum of the put-upon, mannish divorcée. All four lolled about in their Florida ‘condo’, gossiping about savings schemes and shagging. As with the later SEINFELD, it divided British audiences neatly down the middle: those with a native aversion to mile-a-minute wisecracks, audience-slaying references to parochial cultural institutions (“Hey, you try tellin’ that to Art Finkleman!” Cue uproar) and soapy moralistic resolutions gurned into their Bovril and switched over to Did You See..?, while the rest hung about long enough to pick up on some of the finest comic banter ever committed to slightly-too-yellow videotape, in amongst the group hugs and cheesecake sessions, delivered by a cast who’d been round the showbiz block enough times to deliver the lines with perfect timing without seeming to break a sweat. Memory somewhat tarnished by less-than-necessary later years, where the class could be seen ebbing away before your eyes, not to mention innumerable spin-offs such as THE GOLDEN PALACE (Bea marries Frank Drebin off of POLICE SQUAD and quits, leaving the others to run a hotel with CHEECH MARIN as a wacky immigrant chef – although it could have been worse, said cleaver-toting foreigner was very nearly played by ALEXEI SAYLE) and rotten British rewrite BRIGHTON BELLES. SHEILA HANCOCK, WENDY CRAIG, JEAN BOHT and SHEILA GISH sitting around talking about erections? Don’t speak till you’re spoken to, dammit!