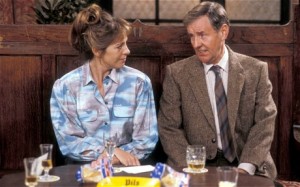 “WE’RE RESPECTABLE PEOPLE, not the London School of Economics!” Best sitcom of the 1980s, beyond a doubt, still unfairly misremembered or simply maligned to this day. RICHARD BRIERS (Martin) lives perfectly-ordered, uber-anal life working for Mole Valley Valves, running 57 different varieties of youth clubs and social get-togethers and generally fussing about the upkeep of The Close. Married to PENELOPE WILTON (Anne) who finds him alternately insane and insatiable. Next-door class A cad PETER EGAN (Paul) is better than Martin at everything, including being nice to Anne. Other neighbours Howard and Hilda build wicker donkeys, sport matching sweaters and pop round for cups of tea. And that’s more or less it. Aside from lunatic pensioners, road protests, errant washing machines, Civil War re-enactments, referee controversies, cricket tournaments, snooker tournaments, the Open University, Neighbourhood Watch fraudsters and misplaced telephone receivers. From the magisterial pens of Esmonde and Larbey. “There’s a dead monkey in there!” “My God!”