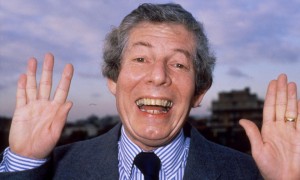 “THEY SURELY DO!” Grizzled ex-tabloid overlord DEREK JAMESON who’d worked in Fleet Street since he was three or something decides to adopt new Rantzen-esque persona for mirthless melange of “hilarious” news reports from around the world examining just what those wacky foreigners think of us, the Great British Public. Cue winsome Japanese news reports about beefeaters and the Sinclair C5, interjected by salt of the earth nuggets of “wit” from Jameson and his cross-examination of bemused by-passers in the street. Instant stardom followed, bizarrely, reaching its apex with Radio 2 breakfast show (“Morning, Morning!”) and NATIONWIDE rehash PEOPLE: “Hope’n’glory, wot’s your story?” demanded Dezza after the nasty theme song (“People like you/who/once in a while/will smile/and tell the story of their lives…”).